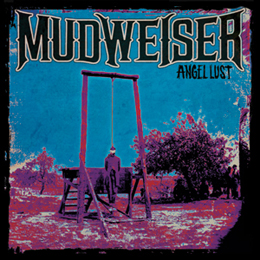 In a further move to get rid of some older releases (see also reviews of albums by [sic], Bad Guys, Héautontimorouménos, Morse, and Daughters), Mandaï Distribution now presents us with the second full-length album by Montellier, South of Fance, Heavy Stoner Rockers Mudweiser, whom we personally came across thanks to the in-between release of the 2011 EP Drug Queens, and as the review posted 17/07 of that year is still available in our “Archive” section, I won't need to get into the band's history anew, right?

One thing not touched on in-depth in said review however, is the line-up changes in the band....so here goes!Originally founded as an instrumental trio comprising ex-Eyeless band members Saïd (guitar) and Xav (drums – he's the only original member remaining), alongside bassist Stef (also formerly of Membrane), the line-up was completed when Lofofora singer Reuno (also of Le Bal Des Enragés), after a short try-out with former Unkindle vocalist Laurent. Since then, Stef was exchanged for Jay (also formerly of Eyeless), and Saïd was first replaced by Max, and eventually by current guitarist Ole.

Another thing not touched on in said review, is the fact that the singer has a very hoarse voice, making a further connotation to the band's name (which on the one hand stands for a muddy pick-up truck, and on the other hand for the day-after shit following a night's boozing, remember?...one of its after-effects (especially when drinking heavier booze – being a hoarse voice, get it?). On Angel Lust, the normal 4-man line-up of the band is enforced with the addition of one Sven Pohlhammer on “space guitar”, but only on the songs “Black Bird”, “Foreplay”, and Back Road”. “Foreplay”, and the equally promising titled “Rumble Love” seem to be likely candidates for the inclusion of some more of those “hot” movie soundtrack sample bits (as on two songs of the EP), but that was apparently something passing for the band, done only on the EP. In fact, there IS a sample at the end of “Foreplay”, but the way that lady says “Go fuck yourself in heaven!” sounds rather like a very unpleasant event is about to happen to the person she says it to! One weird track on the album is the closing track “Nights In White Satin”. Indeed, a cover of Procul Harum's (was it 1971, or earlier?) worldwide hit song. The opening passage being of a calmer nature, Reuno's raspy voice sounds somewhat out of place there...but once the guitarist kicks his distortion pedal things are evened out somewhat, and you're left to appreciate this oldtimer song in this rather different version.

I've tried to find a place on the Internet, where you'd be able to enjoy some full-length songs off Mudweiser's latest album, but the band's facebook page (www.) facebook.com/Mudweiser only get you older songs, and one off the 2011 EP...and at (http://) mudweiser.bandcamp.com, you're only referred to said EP, which is apparently down-loadable for free now!(?)...so I'm afraid that, for any material off Angel Lust, you'll have to make due with whatever samples (if any) are made available by such online sales sites as Amazon, iTunes and others of that ilk! Oh, of course you could also still try the band's page on MySpace (if indeed that still exists – for the address, check the EP's review). Nevertheless, any fan of Stoner Rock can almost blindly buy anything by this band, and consider himself luck to add a nice album to his collection! You actually have a choice whether to get the CD version, of a slightly more expensive double vinyl album (the “double” being quite necessary, as the total length of the album is just over 67 minutes!).