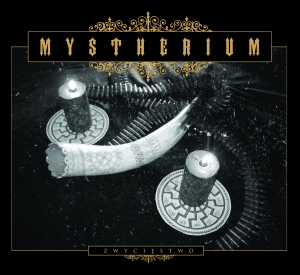 Quite soon after the full length Tysiacletnie Kajdany, which was this band’s fourth full length in a decade and a half of existence, Mystherium return with a new EP, Zwycięstwo. It’s a five-tracker that lasts for twenty-three minutes. The EP comes in a truly beautifully artistic CD-edition via Lower Silesian Stronghold, and there’s a (limited) tape-edition too (Werewolf Promotion). The material was mixed and mastered by Wojciech Cenajek at the Metal Sound Studio.

The mini-recording opens with Hymn, a grotesque and dramatic introduction with Orchestral and Folk elements – indeed an omen to the band’s core business. With Rytual Burzy, Mystherium return to their inherent activities: playing dark, melodic, atmospheric and epic Pagan Metal. It’s like a mixture of Folk, Dark Metal, Doom and lots more. The folkish parts are legio, but I guess the violin lines certainly add a certain level of traditiona(tiona)lism – or is it traditi(nati)onalism? Those violin lines, for what it’s worth, often remind of My Dying Bride’s, and with the slow tempo, I guess this comparison might return again. But Mystherium are not an act focusing on Doom alone. Okay, their tempo surely is limited to un-speed proportions in general, but there is more to detect. Many of the riffs are extremely Black-oriented, with that raw, razor-like sound. The rhythm section and leads, and quite some breaks involved, have a specific progressive attitude, yet without the modernistic definition of Progressive Rock or Metal. It’s just the creative technicity that reveals that prog-laden approach.

Remarkable too are the vocals: deeply growling male ones, yet not exactly like an average Death or Black Metal vocalist, versus semi-spoken / semi-whispered female ones. It’s somewhat occult, I think, and it surely strengthens the mystic, ritual and spiritual approach of this band’s message.

Zwycięstwo is a recording to grow into; it needs a couple of listens before getting the whole concept, before entering this band’s trans-paganised dimension. But it’s not too difficult to do so, I think, for each time you might uncover new elements. But for sure it breathes the glory of the Polish scene: the ritual spells by Aleksandra, the bombastic obscurity à la Decembers Fire, the oppressing yet glorious strength in the vein of Hellveto, the epic heaviness of Graveland (okay, I’m sort of exaggerating, but I want to make a point, you see…), the primal Doom-Goth approach of Neolithic (once again: I am but trying to make a point, okay?!). Or to end in an appropriate way: victory!!!