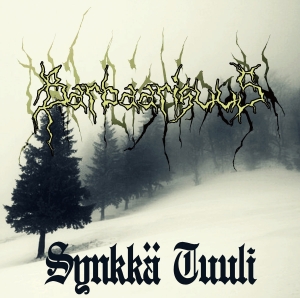 I never mind to write a review for older material, as long as it might need the attention it deserves. Pretty much the same goes for two releases I recently received from Infernal Kommando Records, dealing with the band Nihilistinen Barbaarisuus. This stuff is two years of age, but since 1) I did receive it quite recently and 2) it is of a superb quality…

Nihilistinen Barbaarisuus are a project by Finnish and American people residing in the U.S., formed in 2012 by Mika Mage of Space Ambient / Prog Rock band Lawrence’s Creation’s fame, and Manuel Rodriguez (the latter acts as music writer and not as musician). Synkkä Tuuli was originally released via Horror Pain Gore Death Production on CD (CD-r?) in very early Spring 2013, and re-issued on cassette via Infernal Kommando Records a couple of months later on, at the same time of the Väinämöinen-tape (review will follow very soon!).

Synkkä Tuuli consists of seven tracks that have a total running time of half an hour, and it means something like ‘grim wind’. The material sort of stands for a mostly nasty and grim, old styled form of Ambient-injected Black Metal. The opening track Ylittäen Jäätyneen Pohjoisen I, for example, starts with an extremely darkened, minimalistic and rather fast Primal Black outburst, with the second half of the song being an atmospheric excerpt of esoteric Ambient. And that is sort of the ‘core’ for this album.

The blackened parts are fast and rhythmic, melodious in the Nordic-styled vein, with inclusion of many slow parts, distant, little howling voices (by M.W.S., formerly in mighty Shadows Of The Crypt or Wykked Wytch, Evil Divine and Serpent Ov Old), some Shoegaze riffing and a sound so rough, unpolished (the latter might cause irritation, I think, because the production is like a demonstrational rehearsal recording; it might, at the other hand, please some other listeners as well in case you do rather focus on the essence of the old school scene than some clinically exaggerated cradleoffilthy production; undersigned is going for the second option, evidently).

The Ambient parts are of the floating, mystic, occult kind, mixing integrity with a suffocative nastiness at the background. There is a certain cosmic aspect (not of the proggy-spacy kind!), as well as an esoteric and hypnotic one, leaving no room for dullness whatsoever.

Most of the time both aural angles are clearly separated from each other, but in a subtle way they appear in an unholy marriage too. Especially the title track shows the perfect symbiosis of this sonic combination.

And then there are (short) tracks like Itämeri Anomalia or Ketamiini, for example, that are based on several layers of acoustic guitars, little folkish, including modest piano injections (Itämeri Anomalia); quite counterbalancing but not disturbing at all.

Synkkä Tuuli turns out to be a quite varying album, yet with a clear and cohesive vision. If not taking notice of the sound, every adept of raw and grim but highly atmospheric Black Metal needs to search after this material. And as promised you’ll find back the review on the EP-tape Väinämöinen very soon.