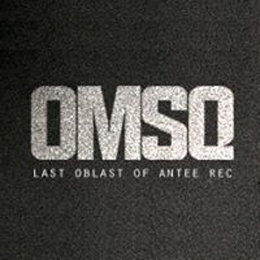 Founded in 2009, OMSQ is a Brussels based band combining elements of Space Rock with Sludge and Noise Metal, doin' most of its material in instrumental mode, and using samples for its "vocal" parts.

Originally apparently a studio project of a duo of musicians going under the mysterious monickers of K54 (guitar, keyboards, synths, (drum-)programming) and AL_WNTR (guitar, bass)...which founded its own label Antée Records, through which they digitally released the track North Sea in 2010 (on that first effort, they were aided by guitarist TechFred, and sampler 5380)...the line-up expanded over the years to now also include the live drummer Bertrand "Bert" D (also plays keyboards when necessary) and bassist Ludovic "Ludo" Sirtaine (whom will also pick up a guitar, or perform synths when/ where needed). Eventually, sóme incarnation of the line-up (which may very well have been the one just cited) did its debut shows in late March of 2013. Without any knowledge of when the other members joined, I also cannot tell you whether they contributed to the band's split releases, the Perfect Suite EP [a 4-track split effort with Shkval (eah band contributing two tracks), issued on a limited rotation of 300 copies of 10-inch vinyl on Sept. 11, 2012 through the band's imprint Antée Records] and Vertigo [4-track split 10-inch EP with The Mighty Progerians (the latter contributing three shorter tracks, and OMSQ one near 10-minute track), again issued through Antée on 10-inch vinyl – rotation unknown]...or to the track which OMSQ contributed to the digital sampler The Artvengerz, compiled by the online GodhatesGod Records and released digitally on the numerologically wacky date of 12/12/12.

With Thrust/Parry, the band comes along with its debut full-length, and it's one which really deserves that term, as the album is a truly fine 62 minutes (minus 5 seconds, that's true, but anyone bickering about that would be a real miser, to say the least) in length. Besides actual samples (from movies, like in the rack "Soleil", where Michael Madsen is in the process of torturing someone to death, bit by bit...in the movie Jacob's Ladder, I guess – for the other samples see credit list of the album), the band also made use of self-constructed vocal parts, with text taken from Luigi Russolo's L'Arte Del Rumori performed by guests Gabriel Séverin, Leevil J. Callcut and Paolo De Caro in one of the album's title track "Thrust". The other title track, "Parry", seems to me to be another tribute to Russoli, with its ambient samples of surround noises (recorded perhaps on some quiet village square?) being supported by nice acoustic guitar!

As for the other music on the album...that's quite a varied surprise, to say the least. Occasionally, you'll find the band falling back to playing just acoustic guitar (or an electric guitar with all overdrive and distortion turned to a minimum), as in the short interludes "Noordzee" and "It All Seems". Their quiet and serene, unilateral structures are in fact a perfect counter-balance for the more noisy (as in a mingling of sound sources, and not necessarily meaning "loudness") parts on the album, and create very welcome resting passages, because they allow for us to fathom what the band does it those more "confusing" tracks and passages! I use the term "confusing" between brackets carefully, because after all, the whole thing doés have structure. In between the calmer passages, the band obviously goes electric, going from more Ambient sounds to more distorted ones, utilizing melodies which cloister the listener to his/her chair while in the process of listening to the album. Well, I guess that would happen to most of us for at least the first 5 sessions. The more exhuberant among us might in fact, ones they've made themselves sufficiently familiar with the material, go into a frenzy of varied dancing styles while listening to the album! Not an easy listen, to say the least, but the more demanding music fan will find something here to please in the underlaying complexity of things, wheres the less demanding will be pleased by the main melodies on top.

Now I made this review a rush job (review done within two days of receiving from HQ), because first of all, the band DID send us a copy of the actual album (which is óne certain way of getting priority), but also because I suspect that hard copies of the album will very soon be impossible to get. You see, the album was released in a collaboration of Antée Records with Brussel's Navalorama Records, the latter taking care of the limited (hand-numbered) release of the CD version of the album. With only 100 copies burned, and 80 of those having been taken on the short tour the band did in the UK in the first part of September, I'm actually expecting that some, maybe all, of the remaining 20 copies (which were made available through Navalorama's webstore) may by now have already gone. Luckily, Antée is releasing the album on double LP, but again there's only going to be a limited release of 300 copies. So, my advice to anyone who's listened to the band's music (via the band's own omsq.be, you can get onto the album's bandcamp page, and from there to the other releases' – no video material is available thus far, but I guess that'll change pretty soon), get out of their initial exited shock soon enough, in order to be able to order and get themselves a copy of this truly great album. Hey...you know what? Baring gaps in my memory, I think this will actually be the very first Belgian band whose album I'll be placing in my personal year-lists for this year!