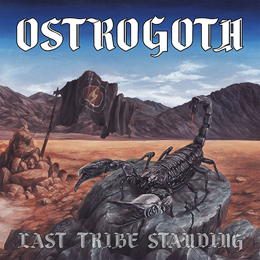 When I tell you I saw this band play live at the first Heavy Sound Festival in Bruges way back in 1983, that probably tells you something about my age. Being one of the first Belgian metal bands to gain some name outside of our little country, it was with great interest I started listening to this album, their first new official release since 1987! Being reborn after a hiatus of some years, the band re-entered the scenes around 2010, playing on Graspop,  Keep It True.  And the reborn Ostrogoth  contained even two original members, Guitarist Rudy ‘Whiteshark’ Vercruysse, who sadly enough passed away on January 5th having suffered from colon and liver cancer, and Mario ‘Grizzly’ Pauwels on drums.

I liked the first recordings of this band, first of all their debut EP ‘Full Moon’s Eyes’ and the subsequent full album ‘Ecstasy and Danger’, and then somehow lost track of the band, so I can’t tell you anything about the other two full albums ‘Too Hot’ and ‘Feelings Of Fury’. But what I can say is that the four new tracks they’ve written and recorded, are in the same vein as their old work, a style that sounds like a mix of Iron Maiden, Judas Priest, so it’s real old school heavy metal.  Whereas they at first planned to only release an EP, just before the recordings would begin they decided to add 4 of their old songs that were recorded live during one of the festivals they played on. Since Rudy had already seen to it that someone would take over his place in the band, should he not become healthy again, the future for this band seems to be paved.  Let’s hope they will continue, and bring out some more new material in the near future.