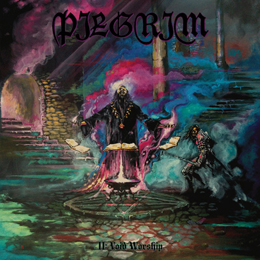 Pilgrim an American Doom metal band founded in 2010 in Rhode Island, NY. The current members are: Krolg Splinterfist, Slayer of Men (Drums) and The Wizard (Vocals, Guitars (formerly also bass)). This very young group made a reputation with their gigs and sound that sound a little like Reverend Bizarre.

After a demo and a full album their second full album “’II: void Worschip” Starting the album with an “intro” with some nice raw guitar riffs and later bass to get in the mood what must come… Second track “Master Chamer” more than 10 minutes but worth to listen till the and. A nice guitar play nice rough , careless and slow. This very young group made a reputation with their gigs and sound that sound like Reverend Bizarre. The third song yes an up tempo track “The Paladin”! Al the numbers are built around de repeating guitar riffs. The clear voclas of the Wizard sounds great, but are pushed to the background. Do you like some great Doom riffs buy this record, this album belongs in your collection!