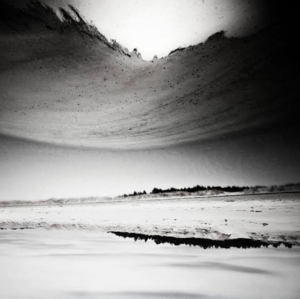 Gdansk (Poland) originated artists Piotr Cisak and Paweł Oleksiński have been working together a thousand times before, very often with other sonic experimentators (like violinist Tomasz Mrenca or Dorota Mortek). I am pleased to refer to a project-album they released in Summer 2015 via Frozen Light, called Arsenne + Cisak + Oleksiński, a collaboration with Artur Arsenne (for the [evidently extremely professional and fabulous] review I’d like to invite you to check out the update of January 17th 2016). The latter, Artur Arsenne, is the guy behind the new label Arsenic Solaris, and part of the Death Carnival Records crew as well. It’s this label, Death Carnival Records, that takes care of the release of a new co-operation in between Paweł and Piotr, this time joined by Olga Szymula. I didn’t know this lady, but I came along a quite disturbing Noise-excerpt via Soundcloud… Olga and Piotr did join forces once again in mean time, on a track called Omen (a release done at the end of May 2015, being another one that includes Paweł as well).

This review deals with the experimental creation Kodomo No Hi (named after the Japanese festival / holiday, characterized by the colourful koinobori-flags), released on tape in an edition of only 42 copies. The material was recorded in one take on May 5th 2014 in the city of Gdansk in the next constellation: Paweł: guitar, interface audio / midi; Piotr: guitar, microphone, stereo / audio interface; Olga: microphone, pedals / effects / footswitch – yes, I’m not kidding! The experience (one-sided cassette recording) clocks about thirty six minutes and brings an open-minded and free-improvised mixture of noises, electronics and industrialised experiments.

Initially it sounds like a broken violin with rusted strings being brutally dismembered by a mutilated creature, but this isn’t but the preamble for a quite disturbing sonic experience. Electronic devices, spacy structures (actually it’s better to label it as ‘destructure’ or ‘misstructure’), co(s)mic robotic sounds, injections of Harsh Noise, and disturbed / disturbing voices. The improvised experiment is the opposite of ‘melody’, for there is none, and it’s an attack on (wo)man’s nerves and health! The few guitar additions, by the way, are quite sublime, offering a well-balanced counterpart to the chaotic sequences.

Even after ten listens (no, I haven’t had the courage to do even half of it) I am sure you won’t, and can’t, comprehend the whole composition. I wonder whether there’s a meaning behind it, besides an exploration of tension, persuasion, fantasy and courage. But somehow there is attraction, a craving, a hint of lust… Or am I going nuts?