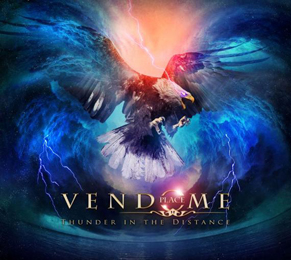 Since a few years Michael Kiske decided to switch his interest from the metal scene to be part of the melodic rock scene. That resulted in two band projects so far, Unisonic, and Place Vendome. Now with the latter he released his third album, ‘Thunder In The Distance’. Again with the help of Frontiers Records label president Serafino Perugino they selected a bunch of melodic rock orientated songs from outside writers including Magnus Karlsson (Primal Fear), Timo Tolkki (ex-Stratovarius), Alessandro Del Vecchio (Hardline), Roberto Tiranti and Andrea Cantarelli (Labyrinth, A Perfect Day), Tommy Denander (Radioactive), Sören Kronqvist (Sunstorm, Issa), and Brett Jones. But overall the sound of Place Vendome hasn’t changed much and without taking any risks, I’ve got the feeling they played it safe. Still the mix of peaceful classical piano and heavy guitar riffs works remarkably well and also Kiske’s high pitched but pure sounding vocals sounds still awesome. Personal favorites are the midtempo ‘Lost In Paradise’ and powerful opener ‘Talk To Me’ but overall you won’t find any bad songs on this album that grows on you with every spin. With the excellent Dennis Ward again at the production helm and with such musicians as Dirk Bruinenberg (Consortium Project), Gunter Werno (Vandenplas) and Uwe Reitenauer (Pink Cream 69) completing the line-up, fans of melodic rock will love this.