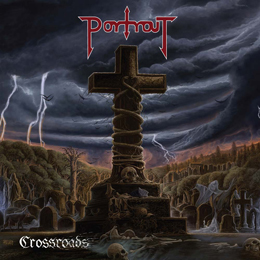 After “Portait” in 2008 and “Crimen Laesae Majestatis Divinae” in 2011 their third full album “Crossroads”. The album opens with some 1:43 minutes acoustic guitar play with synth not bad at all. But when the guitar fades out and track number two start is more the line that I was expected. A single playing guitar a filthy sound till the drums starts and the voice appears and what a voice. Track four is my favorite a straight drum rhythm with some clear riffs and Per’s voice blends great. The sounds remembers me at the 80’s Heavy Metal the clear voice with some great delay on the voice like Saxon did in the early years. I Like this album for now… But don’t forget to listen “Ageless Rites” and “Our Roads Must Never Cross” well produced by Tore Stjerna at the Necromorbus Studio near Stockholm. At last a slow acoustic track with just a guitar and Per’s voice at the beginning sounds this very commercial but all at a sudden comes some drums and a fat guitar riff. That what I like at this record. Just buy this one you will never regret is.