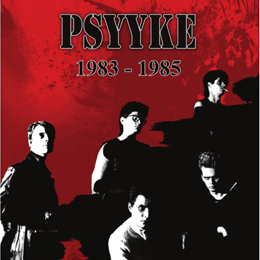 Occasionally, I have a tough time finding a way to start up a review, and in those instances I often find it best to creatively re-write whatever text comes with the info sheet provide by the label...so, here goes!

In the early '80s, Finland enjoyed a relatively short-lived but rather active Gothic Post Punk scene, with the most popular bands (such as Musta Paraati and Kuudes Tunti, who grew to become cult favourites) obviously hailing from Helsinki, the country's capitol, where also the music industry was centered back in those days. West from Helsinki however, in the coastal town of Pori, Finland had a second, albeit smaller but equally active scene, which included the bands Hexenhaus (whose demo compilation was released through Svart in 2013) and Psykke...the latter appearing on the scene earlier, in 1982, under the bandname Arbeit Macht Frei (a name which swiftly morphed into the shortened Arbeit, and equally as rapidly into the stabilized Psykke).

In 1983 the band self-released a single with the songs “Temppeli” and “Neondertal”, which soon became a hit in the burgeoning underground club scene, and for the next two years the band issued several demos, some of which even went on to get sold as far away as New Zealand. Although the band had thus gained an international standard, their search for a label remained unfruitful, due to the fact that the band's approach to the genre kept a rawness and psychedelic element to which labels would turn a blind eye. By the middle of the '80s, the record industry was also seeking out different scenes to milk (ahum, “...sniffing for new trends...” - my ass!, in those days the popularity of a scene was still “created” through intensive promotion campaigns!), and Psykke eventually got itself a deal for the 1986 release of a 12-inch EP with the major label supported Finnlevy subsidiary, but not before the band had tuned its sound to a more mainstream Pop one! The band went on to play some rather big gigs (as compared to what they were used to, that is) in some of the bigger Finnish towns, but really the scene was already waning, and soon enough things ground to a stand-still.

Already in 1984 at least part of the band's line-up had gotten involved in a side-project called Wolfmen, whose sound was based rather in a Johhny Thunders-like sound. By 1988, the side-project overtook the main band in importance, and Psykke was put on hold. The band was taken out of the cooler again in 1996, when they released the 13-track compilation CD entitled Päästä eläin esiin, and went to doing some gigs, but then the band again disappeared into a hiatus.

As far as I can gather, most of the guys (original singer Jallu and guitarist/ keyboardist Yki, finding themselves backed by newbees Elmo on the bass and Moke on the drums) returned to sóme form of activity in the Fall of 2010, slowly making themselves noticed again on the Finnish scene by playing occasional shows. If I understood things correctly (the bio on the band's facebook IS in their native language, you know), the band already released some new material earlier in 2014, and so now there's this re-hashing of older material, which was hand-picked by the band. Besides the tracks from the 7-inch, the guys sought out no less than 14 additional tracks, and the whole was restored from the original demos and mastered at Orgone Studios.

Expect an '80s Post-Punk Gothic in which the Punk element was still rather important, especially in the vocals, which are delivered in the band's native language, and with a very typical intensity which is diminished slightly in only one track, the overall slower “Sininen Maskeija”. Some of the songs get additional synth lines, which give 'em a special atmosphere indeed! Overall, a band with a sound like this would not be a surprise to the Gothic/ Alternative Punk scene of today, but you gotta remember that back when, they were indeed something quite different and unheard of! Things might've improved for the band, had they been able to hang onto their original sound, as by the turn of the '80s into the '90s the Gothic scene again went for a harsher sound (well...at least in part).

And after all these years, I guess it's about time that this band gets recognition for the way they stood up (at least for some time) against commercial pressures from the music business. Of course, these days there's actually room for all things cult revived, and I personally wish this band good things in the future, indeed! I'm kinda wondering what their new material might sound like, really! For some music off the compilation, surf to (www.) soundcloud.com/svart-records/sets/psykke-1983-1985-1.