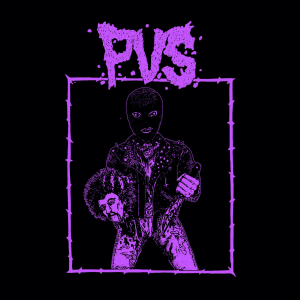 Pus are an act from Peru. Okay, that’s enough for an introduction…

No, seriously, I did not know this band and I have about no further information about this act. I think they’re quite new, for this must be their first release (at least, when focusing on their BC-page). It’s a quartet consisting of Parasito, Nauseo, Porfi4do and FXTXZMX, hailing from the capital city of Lima.

Never mind; let’s focus on what these pretty guys bring with their untitled (debut) EP. They wrote and recorded five short sonic assaults in 2020, with a final mix and mastering done at the Dead Air Studio by Will Killingsworth. It was initially self-released in 2020 via digital sources and eventually also on cassette (in collaboration with some local labels). And now this material has been repressed on vinyl in a partnership of Discos Huayno Amargo, Sin Temores Records and our own Antwerp-based Babylon Doom Cult Records. This vinyl edition was pressed in an edition of 200 copies, in case of interest.

As said, this self-titled EP consists of five short pisses, sorry, pieces, clocking about eight minutes (four last in between one minute and one minute and a half; just one composition lasts for more than three minutes). They’re ‘sung’ in the band’s mother tongue, Spanish, by the way. It is a mixture of old schooled Black Metal and Hardcore Punk, organically well-balanced in between both sonic angles. The bass lines, some leads, and the anthemic shouts reveal these guys’ adoration for intense, intolerant Punk from the Old School. It’s rhythmic and uncompromising, fast and intense. The rhythm guitars and backing riffs, the guitar sound, and the main vocals are rather blackened, reminding me of the Black Thrash combos from the Eighties. The drum patterns bring forth both of them, mercilessly and violently.

Their four self-written pieces are strongly energetic and fast, yet with a cool variation in speed. I mean, there are several tempo-changes going on; sometimes decelerating a little, then again exploding with some pyroclastic force. Yet above all, the specific and characteristic groove strengthens the massive, almost cosmic energy. Also remarkable is their cover of Guerilla Urbana, Eres Una Pose, which is a very old piece, a proto-type of South-American Punk anarchy.

The sound quality is like it must be like: rough, unpolished and edgy, yet still well-balanced. The mix reveals Will’s high-standard studio-work qualities once more, for every single instrument is clearly represented. Which smoothly brings me to the sole remark I have to make: eight minutes and that’s it, guys? Serious? More soon, I hope!