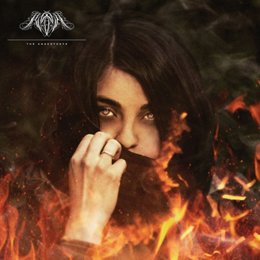 This Philadelphia based band may be relatively new to many European Post-Metal/ Post-Hardcore fans, but Rosetta has apparently been about for a decade now, and in that time they already delivered 3 full-length albums prior to this newest one. They have a funny bio, which I didn't have the heart to keep from the reader...

“Rosetta is serious music made by unserious people. Having lasted through ten years, hundreds of shows in over 20 countries, and the world's worst vans, the same four people are still pushing to find the intersection of heavy and beautiful – and getting grumpier in the process. Pushing back against the relentless compartimentalizing and niche-marketing of 'independent' music, Rosetta asks: “What if instead of calming down, musicians got darker, meaner, and more confrontational as they got older? Taking cues from noisy '90s Hardcore, Sludge Metal, Ambient, and Fugazi's cranky DIY ethos, they're answering that question as loudly as possible.”!

What did I learn from that intro? Firstly that singer/ electronics handler Michael Armine, guitarist/ pianist/ backing singer James Matt Weed, bassist/ backing singer David Grossman, and drummer Bruce McMurthrie Junior have been the band's members for the past 10 years (they actually formed in March of 2003 – something I learned from another source); the guys like a bit of fun, but are serious about their music-making; they've been around somewhat, bringing their music to audiences far beyond their home state; their music is a nice composite of styles...and should not be stereotyped into one specific niche! Other things I learned (from other sources), is that the band is signed to Pennsylvania based Translation Loss, and The Anaesthete is apparently the first album nót on that label (did you notice my uncertainly there though?). The band's first release was the 2006 full-length The Galilean Satellites, which was followed up by sophomore album Wake/ Lift in early October 2007, and later that same month by the EP The Cleansing Undertones Of Rosetta (with 4 untitled tracks). Prior to the release of 3rd full-length A Determination Of Morality (issued in May 2010), the band also contributed a (previously unreleased) track to a 3-way split CD (released a month earlier) with label mates East Of The Wall and Year Of No Light. Then, in December 2011, came the release of a split single with Junius (again with an exclusive track from Rosetta)

So now here's the band's latest offering, and as much a first for me as it will be for many Europeans, although I certainly hope that will change thanks to European label Debemur Morti releasing the album in both CD as well as double vinyl LP versions! Expect to find more melodic passages (made up of great lead guitar play with progressive hints, and therefore in a higher octave of the note bar) alternated against more explosive ones (more riff-geared and therefore in a lower part of the note bar), both in a somewhat repetitive yet still catchy mode, backed up with an equally repetitive yet solid rhythm section, and topped off by a fairly aggressive singer (whom finds himself replaced by one Eric Jernigan on the song “Hodoku/ Compassion”, making for the only song on the album with calmer and cleaner vocals – the whole songs is calmer overall, by the way, and even includes some piano solo play towards the ending) ...whom is missing only in two instrumentals...well, not actually missing, because it makes for a very nice instrumental “Ku/ Emptiness” (I have to say, guitar play on this track is also foremost of that lead play style, and not so much of the deeper sounding kind)...and the album closing “Shugyo/ Austerity” is really a “mere” atmospheric type of track. A weird track too, soundwize, because it really only exists of lead guitar and electronics...and there may also be some bass play, but I cannot be certain, as all music is put somewhat in the background. It's like listening to someone practicing atmospheric parts in a relatively big hall, while you're actually standing outside of a badly sound-insulated building (with its doors open, but with still some hallways in between the practice place and the outside, if you get my drift. Oh, by the way, a touch of attention should go to the track titles. All 9 tracks (which vary in length from 2:56 on the short end, to 10:23 on the long end – the latter for the album's opening track) have both a Japanese as well as an English title, see? A bit funny, or rather, weird, for an American band to do (especially considering none of the guys are of Japanese decent – or, at least, nit to my knowledge), but it also brings a spot of intrigue...I mean, that's how I feel about it anyway!

Another funny thing about the band, is that their own website (www.) rosettaband.com only mentions a summary info about the new album, and the band's next upcoming show (in January 2014), and then reverts you to Twitter and facebook for additional info on the band. Wait...I know the intro's a bit long, but hold on! When you surf over to that facebook page (link provided, you know), the first thing you read is that “Facebook is a waste of your and our time.”, after which they still mention their own website's address! I mean, I agree with the uselessness of social network media, but how can it be a waste of time when you're using it as an intermediate to promote your music...see? Because, in the “Music” section of said facebook page, you dó get re-directed to the album's current page on Bandcamp (which is something the band completely forgot to do at their own site), whence you can not only listen to songs off that album, but also to material off the band's other releases! Somewhere during my research on this band, I found a comment by one reviewer saying something in the lines of 'Rosetta may not have been up to par with the likes of Cave-In, Neurosis, and Isis, but they have now come pretty close!'...a statement with which I wholeheartedly agree. In other words, year-list material here! And, before I forget, a double LP version of the album would be released somewhere early 2014...but the band doesn't mention by which label (perhaps again Translation Loss after all?).