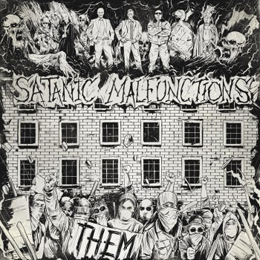 Satanic Malfunctions formed in the mid of the 80’s returning of the 22 years with a new album “Them”. With vocalist Kai, guitarist Yaga, bassist Ryan and drummer Ade they still plays aggressive and ultra-fast hardcore/punk mixed with grind/thrash frenzy, fueled by political lyrics. This will definitely appeal to all fans of ACTIVE MINDS, DISORDER, ATAVISTIC, ELECTRO HIPPIES, L’ARM, HERESY and makes you feel like its second half of the 80’s of the 20th century.

“Them” is just 30 minutes banging. The guitar rams at chords and the vocals is more screaming. Lots of variety is not available on this cd. After listening of 10 numbers the fun is over and out.