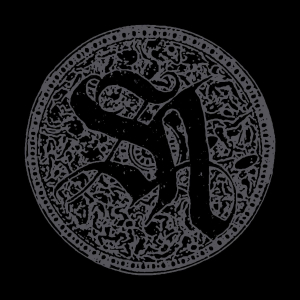 The flame is burning, even where least expected…

I had not heard about Serpentine Apostle, but this band from Tallinn, the capital of Estonia, indeed seems to be covered in mystery and enigma. As far as I think that I’m informed, they (don’t know whether this is a one-human entity or a combo with several hominids) did record just one thing until now, and that’s the single Three Envenomed Fangs. As said, there is just one track on that EP, though it has a total running time of 17:19 minutes. Indeed, prepare for an intense sonic journey…

Two more things before the actual review on the aural content. First of all, I do appreciate the sigil, the artwork: mysterious, occult and bewitching.

Secondly, this EP was made available digitally, as well as on tape. The cassette edition is limited to 100 copies (and I think they’re almost sold out, so hurry up!) and this via the awesome Lithuanian Underground Black Metal label Inferna Profundus Records.

Three Envenomed Fangs is a piece of pure Chaos worship, an expression of impure sounds of Evil. That shows as from the start. Okay, the first twenty seconds are modest, with a hypnotic guitar lead introducing the ritual, yet then the game explodes. Melodic but extremely harsh guitar work, pounding bass lines, unstoppable drum salvos and flaming, deep grunts are canalised into a massive, overwhelming, discordant whirlwind of Aural Chaos. The several layers of string rape (lead and rhythm guitars + basses) do have a melodious touch, but the focus lies on sonic destruction and apocalyptic rage.

But this goes further than ‘just audible terror’, for the material consists of some fine intermezzi too. Okay, the better part is harsh and unstoppable, with these mesmerizing leads, skull-crushing rhythm section and sulphur-spitting growls. Yet once in a while you can pass through another intermezzo: ambient or acoustic, decelerated in speed and / or ceremonial in atmosphere, these chapters make the whole excursion a total-experience, an adventurous wall of sound. Adventurous, yet with a bleak, dissonant edge.

I am surprised by the skilful result, especially when considering that this might be a debut labour (though as said, I do not know who is behind this project, so maybe it deals with one – or several – experienced musician(s)). It is not that evident to deliver a work that lengthy at the one hand and that intense and savage at the same time, that permanently preserves the listener’s attention. Hypnosis, diabolical ceremonies, hysteria and misanthropy, Three Envenomed Fangs is a fine soundtrack for negativism and discomfort.