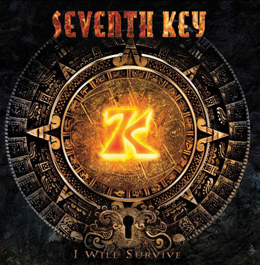 Together with Streets bandmate Mike Slamer, Kansas bass player Billy Greer formed Seventh Key in 2001. They released two critically acclaimed albums, the self-titled debut in 2001 and ‘The Raging Fire’ in 2004, followed by the live cd/dvd ‘Live In Atlanta’ in 2005. Now 8 years later they finally released the long awaited follow up and it’s again a fine piece of work. Musically however there are no big surprises. ‘I Will Survive’ continues where they left off on the previous albums with great AOR & melodic rock tunes with some symphonic and even progressive influences. The flawless guitar parts of Slamer, the warm and superb vocals of Greer, the fine arrangements of the songs and the excellent production are all elements that add to make this a great album. Personal favorites are the Kansas inspired title track with a guest appearance of bandmate Dave Ragsdale on violin and the power ballad ‘What’s Love Supposed To Be’ where buddy Terry Brock (amongst others) provided his rich vocal harmonies.

Again the longtime partnership between Slamer and Greer turned into another quality album that fans of melodic rock certainly will adore.