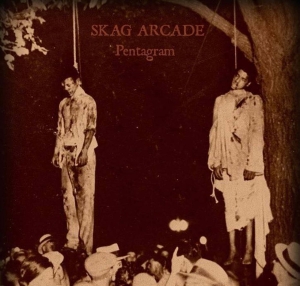 What I do appreciate when referring to Spain-based Craneal Fracture Records’ roster is the diversity Jose Murcia and his crew have to offer. Everything that dwells within regions of Harsh Noise, Musique Concrète, Experimental Drone, Field Recordings, Noise Wall, Power Electronics and the likes might pass by. Even some extremer sub-genres of the Metal area are represented from time to time.

The highly interesting package that I did receive from this Spanish label did include a cassette from Skag Arcade, a project hailing from Italy’s capital city Rome. The Pentagram EP is available the digital way, as well as on C30-tape in quite a limited edition. It consists of two compositions that last for just over ten minutes each.

I can’t recollect the source of the cover picture (the artwork was done by Skag Arcade’s frontman Paolo Colavita), but seen the happy idea behind it, one might expect a sonic journey through dimensions cold and violently vengeful. From the world of darkness I did loose demons and devils in the power of scorpions to torment… Joy ensured!

Intermediate States starts quite intimate, but after about a minute and something, a harsh shrieking noise attach enters. The dynamic wall of sound pierces and screeches, unmercifully, violating. Step by step, droning passages enter, creating a misty veil of occult and magic obscurity. I truly adore the grandiose equilibrium in between elements from abyssal Drone and mysterious Noise, combined into a somewhat mesmerizing aural hypnosis. The composition (I can’t exactly call this material a ‘song’) includes sampling from Kyema, one of the many influential albums by French artist Éliane Radigue, as well from an interview once done by sweety Charles Manson, though it’s an experience to dissect those details.

The title track, half a minute longer than Intermediate States (10:49), also slowly evolves. Starting from a long-stretched and minimal, desperate nothingness, a collage of soundscapes unveils itself. And it’s quite disturbing and horrifying. Injected with different samples (vocal additions included) and percussion-like elements, Pentagram is like a soundtrack for disgust, apathy and despair. In a decadent, indecent way, or is it from masochistic point of view, the uncomfortable wave of noise attracts and repels (and I mean this positively!).

In conclusion, I dare to say that this EP / tape is quite pleasant, despite the unpleasant atmosphere. It will get appreciated by everyone who ‘likes’ Dark Drone, Minimal Dark Ambient, Ritual Noise and everything in between. No gods represented (we all stand alone, dear Paolo), just the satisfaction of orgasmic sonic pleasure!

PS: some more Craneal Fracture Records reviews will follow in a (near) future…