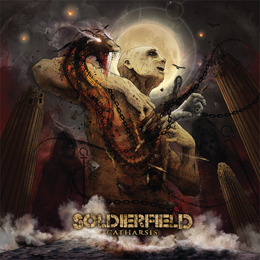 Another “new” band on the block with a rich past arose on the British landscape in the year 2011, when the well-seasoned vocalist Leigh Oates (of Order Of Voices and Rise To Addiction repute), guitarist Steve Wray (also Rise To Addiction, and of Blaze), bassist Wayne Banks (also of Blaze, with Messiah's Kiss, Sabbat and Joe Lynn Turner as further items on his curriculum) and drummer Jeff Singer (also of Blaze repute, as well as having spent time with China Beach, Kill II This, and Paradise Lost) joined forces with newbee guitarist Andy Trott with the aim of putting a bomb under the contemporary Metal scene. At the turn of 2012, the band released a demo version (with Wray producing) of just one track, and on the strength of that alone, music industry insiders were already found whispering about a new band to watch out for.

The band signed to Metalbox Recordings, who released the 5-track debut EP Bury The Ones We Love on October 2012, and at the same time Soldierfield released their debut music video, for the track “Leave You In Dirt”. The track was not only shown on Skuzz TV, but also included in the cover-mount CD of the Sept. 2014 issue of the infamous Metal Hammer magazine. The EP itself received great reviews from a broad range of the music press, and performances at the SOS Festival and support slots with the likes of Black Light Burns and Sinnergod gained the band ardent fans through the ferocious shows. All along, the band continued to write new tunes, and eventually endeavoured to catch the live feel of 'em in the studio, with Wray again functioning as producer (darn great, ain't it, when one has such a handy dude within its own line-up!?).

I have to say I'm not that surprised that the Manchester based band fares so well, both with the music press and fans alike, because rather that adding a “Core” element to their Thrash Metal geared music, the dudes rather harken back to a twin lead guitar attack from the Heavy Metal era (which they perform quite admirably well, and that with tunes which are both instantaneously catchy and contain a degree of underlaying complexity to please the more seasoned and occasionally more demanding music lovers). And with his semi-clean, semi-acidic soaring vocal stylings, Oakes puts the balance toward the Thrash genre. He proves to have a very nice voice indeed with the album's closing track “Cut The Ties”, starting off the song with a rather calm voice, and gradually gearing toward a soaring one toward the middle of the track. If anything, the track shows quite clearly that at the basis of the soaring voice, is a rock-steady, experienced one!

Okay, so it's time to tell you guys where to go for some listening sessions, eh? Well, best place to go, is the “Music” and “Video” sections at band's own (www.) soldierfieldband.co.uk. In the music section you'll find a possibility to listen to samples of all tracks on the band's debut EP, and in the video section there's the music videos the band made for the tracks “Leave You In The Dirt” and “Skyflower” (again off the EP, and lyric video only), and short “trailers” which I'm guessing purport to the recording sessions of the album (mind you, I was unable to check that, as my on-line time is limited – no Internet at home, you know, so I have to make due with whatever time I have left at work to gather as much info as possible). It means there's no full-length material off the new album available just yet, but perhaps you should also check whatever pages the band might have on other music sites (such as MySpace, perhaps even Spotify?) and on a possible facebook page?