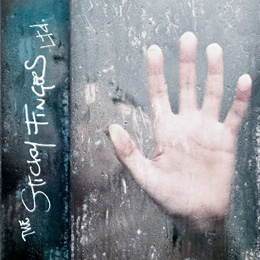 Here's yet another Italian band which has been struggling for years to get an album out, although they've toured the North of Italy extensively at certain times. Then again, maybe their musical choice wasn't that evident, eh?

You see, when the Vignola (Modena province) based act started out in 1996, and that under the simpler monicker of Sticky Fingers, the power trio (of which only singer/guitarist Lorenzo Mocali remains) dedicated itself to a '70s era Blues Rock, heavily influenced by the likes of The Rolling Stones, Faces, Humble Pie, Beatles, Cream and Lynyrd Skynyrd. With a sound characterized by a hybrid of Blues Hard Rock and Psychedelic Rock, the band's performances found SF playing several Classic Rock and Blues standards, which included length jams that gave the band a positive live reputation during the shows it did in the Emilia Romagna area and in northern Italy. The band released a coupe of demos (containing covers of '70s songs as well as original ones), but then the trio went on a hiatus, the separate members busying themselves in other musical projects.

The band reassembled in 2013 under the revised name, with Mocali and drummer Flash (been with the band since 1999) allying themselves to second guitarist Inch and bassist Jaypee. The bio which I got from the label with the promo of the album (and which is actually the only available info I could find) tells us that the sound of the band is today “...more Rock oriented, with snarling guitars and vocals and a killer drums/bass groove, pumping a compact and dense sound that leads to the composition of new adventurous songs...”, which the band recorded during the last winter and spring. Last August, they got in contact with logic(il)logic Records, and signed a deal for the release of their self-titled debut album.

In spite of the band being more Rock-minded these days, you can still expect some very nice Classic Blues Blues Rock moments as well, sometimes incorporated within a song, and occasionally spread over the length of a complete song (check the song “Jailhouse Tonight” with its great slide guitar and typical lead guitar; the acoustic album closing “It Ain't Over” has the same quality, although in quite a diferent way – wonder whom the female backing singer is on that one). As their “standard”, the band chose to display the song “Serial Killer” on their facebook page (www.) facebook.com/thestickyfingersltd?ref_type=bookmark (posted 08/11/2014 in the “Timeline” section there). A live video for that song is also available at (http://) youtu.be/3CHKxvqJXww?list=UU9rldeHZEOOFSmgplIRP7qzQ (hum...long link, ain't it, and I'm uncertain about those two “OO”s there; might be “00”s in stead). You'll find a nice Hard Rock tune with some Blues undertones, and with a singer whom does his thing without the otherwize so frequently present Mediterranean accent! Normally, the label itself posts two songs off their releases on the music player at (www.) logicillogic.net, but I was unable to find any at the time I checked. If the situation's changed by now, that's where you might find additional material by the band. Otherwize, you might have to make due with the possible 30-second samples usually posted by your trusted online sales sites (Amazon, iTunes, CDBaby, etc...).

Nice stuff, and I for one am interested in finding out where this band might evolve to...at any rate, I'd also love to hear another batch of songs by these guys!