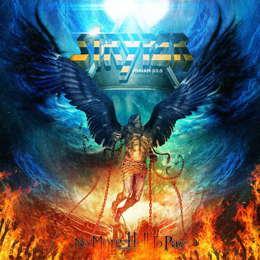 Beginning this year Christian rockers Stryper signed a deal with Frontiers Records which resulted already in the release of ‘Second Coming’, an album with fourteen classic songs re-recorded plus two new songs. Now with ‘No More Hell To Pay’ they present a brand new original studio album and again with the original line-up of Michael Sweet (vocals/guitar), Oz Fox (guitar), Tim Gaines (bass), and Robert Sweet (drums). Produced by frontman/guitarist Michael Sweet himself, the set features some of Stryper’s strongest and heaviest material ever. Every song has a raw sound and hooky heavy guitar riffs that sends you right back to the eighties. With everything in minor keys, it sounds a little darker and a little tougher and is definitely Stryper’s heaviest record to date. The wide vocal range of Michael Sweet is mostly intact. Craftsmanship and enthusiasm are still present however some songs are subject to the eighties cliché sound. With songs like ‘Revelation’, ‘Jesus Is Alright’ and ‘Water Into Wine’ the Christian theme is, as always, obvious. From start to finish this is pure Stryper album that easily could have followed ‘Soldiers Under Command’ or ‘To Hell With The Devil’. Longtime fans can buy this release blindfolded.