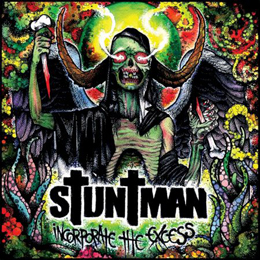 You know, in this “business” of music journalism, I have found that it's usually the “small” labels which keep coming up with rather nice surprises...and the last one on that list is this album by the South-of-France Noise-Hardcore act Stuntman, who turn out to have been around already since the autumn of 2002! The band hails from Sète, which is situated in the Herault region (Languedoc-Roussillon), and somewhere between Montpellier and Beziers. The coastal municipality (which houses over 40,000 people) is actually ensconced between the Mediterranean Sea and the salt lake of the Étang de Thau, and some important people have had Sète as their birth town, including actor/ movie director Jean Vilar (1912-1971) and French chansonnier/ poet Georges Brassens (1921-1981).

With singer Rod (short for Rodolphe) and bassist/ backing singer Franck as pivotal members, the line-up went through a couple of changes during the band's history, starting with the departure of original guitarist Frank and drummer David in 2004. Current guitarist Flo then entered in the picture, but before Ivo took his seat behind the drums in the Fall of 2009, the line-up went through three more drummers, one of whom staying only as a temporary replacement during winter & spring 2006. Funnily enough, each of the band's former members has been featured on one of the band's recordings (the temp drummer contributing to the recording of one track for a compilation album). Citing the likes of Kiss It Goodbye, Botch, Rorschach, Breach, Jesuit and Siege as their influences, the band had a first full-length release, entitled Among The Ruins, in 2004. They followed that up with the 5-track, 2007 mini-album Signed In Blood, and contributed a track to The Black Sabbath Collateral Damage split tribute, released the same year. In 2009, the band was featured on a split release with Chere Catastrophe, and in 2011 the band found its first official full-length The Target Parade released on both CD and vinyl (limited editions of both, really) through the small imprints Prototype Records and Karameikos. By the end of 2011, the band had done some 150 shows during its 10-year career, were on 5 short European tours, and had played on the same stage as some of its favourite bands, including Coalesce, Genghis Tron, Jucifer, Kongh, Mumakil, and Russian Circles. In December of late, Prototype Records, in collaboration with Swarm Of Nails, released an anthology compilation (covering the band's material from 2003 to 2013) entitled Scarce Tunes Overload in a very, véry limited rotation. But now...there's this new “full-length”!

An album which shows positive evolution for the band, because if indeed some music reviewers complained about the relentlessness of the material and found it in need of some breaks in order to soften the blow, then that's exactly what the band provided this time around! Definitely, the 4 members have fed off each other in admirable way, and have found a way to bring those necessary breaks and tempo changes in their borderline GrindCore/ near-Crust type of unhinged Hardcore. In fact, for the album's closing instrumental, the 8:40 “Scarecrow Warfare”, the guys even show that they can play a well-structured Doom track, and are capable to play around a simple repetitive riff without making it come out boring...quite on the contrary, I'd say! For a listening session of the complete album (I used the term “full-length” with caution, because the album only lasts just under 26 minutes), consult its page at (http://) stuntmannoise.bandcamp.com (where you can also listen to older material by the band, by the way). Want some videos? Check the “Video” section at (www.) facebook.com/stuntmannoise.

Wanna hear something positive about the “length” of this album? Even allowing for a short rest after your initial confrontation with the power of the album's material, you could play it twice in one and the same hour! And believe me, you wíll get up an puch that “play” button again, possible several times in a row...because what Stuntman deliver on Incorporate The Excess is highly addictive. So, end conclusion...feed the album to my “Best Albums Of 2014” anytime. I expect a great many of you, readers, will follow that example!