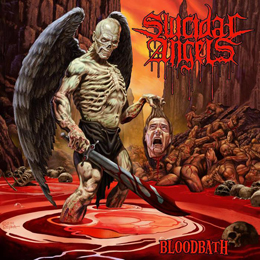 Suicidal Angels is a Greek trash metal band that was created in 2001 by guitarist and singer Nick Melissourgos as a school project. but it wasn't until somewhere in January 2007 that the band started recording their first full length album entitled "Eternal Domination" which was released in July later that year. During that same period, the band did several tours with bands like Rotting Christ, Kreator, Massacre and many more.

So this is a fairly young band (considering their break through) in comparison to other trash metal bands that just released (or are about to released) their record. But that doesn't make them less good. To be honest, this record is one of the best produced trash metal records i hear in a long time. Everything falls into place on this one, sound and production are top notch where even more experienced bands struggle on this area.

Song wise i am a bit disappointed, but this is more of a personal matter because the songs themselves aren't really life changing (in my opinion). They are good (maybe lack a bit of strength) but they just don't appeal to me, the fact that the songs are very similar doesn't help. But this is definitely a band to keep an eye on.