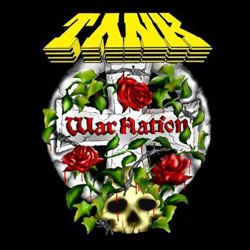 I remember when way back in 1982 one of my friends bought a copy of the first Tank album ‘Filth Hounds Of Hades’, and how it created quite some kick.  This was almost raw energy, poured into a musical equivalent.  However this didn’t mean that I became a great fan of this band, but they had some good tunes.

To my great surprise I was given their new 2012 album ‘War Nation’ to write a review about.  I didn’t  really know what to expect after this many years, With two members of the original line-up left, and a good vocalist like Dougie White (ex Rainbow) this new material couldn’t be bad.  They also saw the return of Steve Hopgood, another Tank veteran. Whilst this new album isn’t as explosive as their first album, this band still delivers material that can stand the test with material some much younger bands are releasing.  It’s classic heavy metal with it’s roots in the eighties, but with a contemporary sound.  And what I would never have thought possible on a Tank album back in the eighties, they’ve even managed to bring us a ballad. Nice to have you back guys.