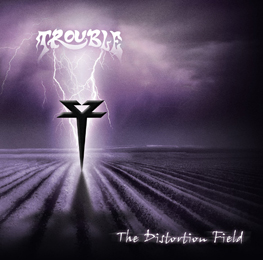 I have sat on this review for some time. Trouble was a long time favorite band of mine (unbelievable gigs at Dynamo Café, Dynamo Open Air and Lido), so I did not want to rush to severe judgement, writing a review without giving the new album enough time. Well, I've had enough time, and I have determined that the best days of the Trouble guys from Chicago are clearly over. Compared to the material that the band has written in the past, this material just isn't in the same bullseye league in terms of quality. There are some exceptions, “Hunters of doom” and “Sucker”, however, are speedy and catchy cuts that do a little justice to the best of the band's up tempo energy suckers we've heard over the years. “Paranoia conspiracy” isn't necessarily a speedy cut, but it certainly contains infectious guitar work by Wartell and Franklin.  New vocalist Kyle Thomas’ vocals are quite impressive, screaming as banshee Darren Travis (Sadus) , angry as Phil Anselmo and also emotive as J.B. (Grand Magus) , but I have to admit he lacks soul and grit he ain’t no Eric Wagner. Aside from the three aforementioned tracks, none of the remaining songs stand out to me at all. Instead, the band flounders in mid tempo and mediocrity the rest of the album. Additionally, I have no complaints regarding the solos and shredding; the pair are in fine form.

Having been a fan of this band for years , The Distortion Field  will march back into my CD rack, likely to collect cobwebs while albums such as Psalm 9, The Skull, Trouble and other greats from the band catalogue still get regular play in my stereo. I expected more from a band that has released these great albums.