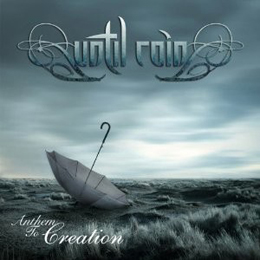 Formed back in 2004, Greece progressive metal band Until Rain released their debut ‘The Reign of Dreams’ in 2009 quickly followed by the EP ‘Pandemic”. Now 4 years later their second album ‘Anthem To Creation’ has seen the light of day. The eleven tracks presented here are characterized with a very complex and experimental structure consequently resulting in multiple spins to get customized. Obviously these guys are very talented and creative musicians and like to show this to the world. Composing with an open mind they add many musical elements to their sound such as  prog, melodic and experimental metal, art rock, electronic and sometimes even extreme metal and odd time signatures. The result is a stunning piece of melodic progressive metal with beautiful epical and orchestral parts. Also the powerful and high pitched vocals of Yannis Papadopoulos are incredible. Still Until Rain has to beware of overdoing things and let the songs breath more instead of choking them. If they keep this in mind this band could be a real leader in the world of progressive metal. ‘Anthem To Creation’ demands a focused attention but certainly will appeal to progressive fans with an open mind.