Upon A Burning Body 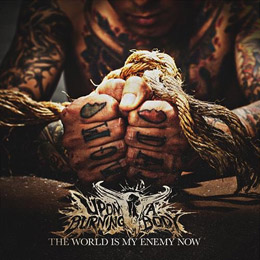 Upon A Burning Body's music is generally listed as Deathcore (with additional influences from Groove and Southern Metal), but quite honestly, I personally fail to see the difference with the original definition of the term Metalcore (= a blending of Hardcore music with elements of the “Metal” - be it Black or Death – genre). Ach, well...everybody's entitled to their own view, right, but what eventually should prevail, is how the musicians see themselves! Anyhow, I cannot remember having heard of this Austin (TX) based act before, in spite of the fact that they already are at their 3rd full-length label release, and have been in existence since 2005!

The original line-up of the band consisted of mainstays Danny Leal (lead vocals and formerly of As Blood Runs Black), Sal Dominguez (guitar) and Ruben Alvarez (bass), alongside drummer Juan Hinojosa and second guitarist Ryan “Rey” Ellis, the latter already departing that very first year to be replaced by Chris “CJ” Johnson. 2005, by the way, was also the year where the band released its debut 7-track EP Genocide (re-issued the year after with 2 new bonus tracks) and an additional self-titled 6-track demo, and for a long time these would remain the band's only outcome. Meanwhile, at the drum position, entered Ramon “Lord Cocos” Villareal (also of Hematidrosis) during the second part of 2008, and it's with that line-up that the band signed onto the Sumerian Records label, with as first result the April 2010 release of the debut full-length The World Is Ours.

In early 2011 however, Villareal departed from the band, who relied on their old drummer Juan Hinojosa until halfway the year, when he was replaced by Jonathan Gonzales. In 2012 then, CJ left, and with Alvazez taking over his role, the band recruited Seth Webster (of To Speak To Wolves) to fill the vacant spot. This renewed line-up recorded the album Red, White, Green (with renowned producer Will Putney, of For Today and Body Count fame) which, upon release in March 2012, debuted at #105 on the Billboard 200 chart. A clear sign that the band was on its way up...but the line-up troubles would not be over yet!

Early 2013 indeed saw the departure of Gonzales and Webster, leading to the recruitment of current bassist Rey Martinez and the temporary return of Villareal (he was to depart from the band in favor of Tito Felix after having contributed to the recordings of the latest album). What with some time in between the release date an the time of writing, I can already signal that UABB's third album (which was again tracked, mixed & produced by Will Putney at New Jersey's The Machine Shop) did even better than its predecessor on the Billboard 200 charts, reaching #39. As a highlighting result, the band toured on the massive Rockstar Energy Mayhem Festival and the Vans Warped Tour throughout the Summer of 2014, and subsequently supported Asking Alexandra on their Nov.-Dec. touring throughout North America (alongside Bless The Fall and Chelsea Grin). There's a couple of guest performances on the album (Matt Heavy of Trivium featuring on the song “Blood, Sweat And Tears”, and The Word Alive's Tyler Smith on “I've Earned My Time” - both binging the clean vocals to those songs, I guess?), but really that's not the most important thing about UABB's third full-length! You see, with the criticisms for their second album in mind, the band pushed the envelope, and came out with what the label states to be “...their most aggressive and intense offering in their career...”. It's also, mind you, fiercely melodic overall! If, goin' on the bandmembers' names, one might suspect a certain “Latin” origin, one might be justified in that belief when hearing the short (107 seconds long) acoustic instrumental “A Todo Madre O Un Desmagre”.

To check out some of the band's music, I totally recommend you to look up the band's page at (www.) spirit-of-metal.com, where a total of 11 videos can be found (of which “Red Razor Wrists”, “Bring The Rain”, “The World Is My Enemy Now” and “Scars” are all off the latest album).