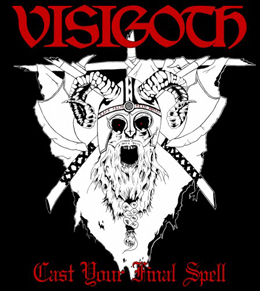 Final Spell is the debut ep by the Salt Lake City, US band Visigoth who have been around since 2010. Nostalgic metal fans will like their mix of teutonic bombastic and US melodic power speed metal as it is also performed by Helloween, Twisted Tower Dire, Omen and Grim Reaper. Clear vocal lines, huge chorusses, an impressive rhythm section and lots of fast guitar solos are harmonizing perfectly. The opener “Creature of desire” and the title track are powerful Priest-like speed metal hymns out of a time machine from the Eighties. “Seven golden ships” and the last track “Call of the road” are much more melodic and shows even some Manowar-parallels.

Visigoth have every reason to be proud of their first effort. Who would have thought that traditional metal could still sound so enjoyable these days?