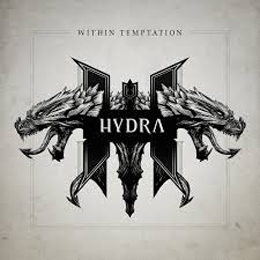 You know, Hydra is the first album by this Dutch band I've had to review, and part of the reason for that, of course, is the fact that Within Temptation went through several changes in musical direction during its career, which started back in 1996 when the band was founded by singer Sharon den Adel and rhythm guitarist/ grunt singer Robert Westerhof. The latter left his tasks to live rhythm guitarist Stefan Helleblad (in writing and recording phases of the band's material, Westerhof remains active) in order to raise the 3 children he has with den Adel.

As for the changes in musical direction, the band's first album (1997's Enter) combined Doom Metal with Gothic Metal and Symphonic elements, had dual lead vocals, and got the band a name in the Dutch Underground scene. A more general popularity came with sophomore album Mother Earth (2001, #2 notation in Dutch album charts), and more specifically with the single “Ice Queen”. The Doom elements were gone, by now, the band geared to Symphonic and Gothic Metal elements only, with den Adel remaining as sole lead singer. An even more commercial direction was taken with follow-up album The Silent Force (2004), to the dismay of plenty of critics but to the pleasure of an ever-growing fanbase. The commercial direction was further developed on 2007's The Heart Of Everything, yet some few critics saw through the commercial surface, and hailed the band for the optimum balance between the melody of Mainstream Rock, the depth and complexity of Classical music, and the dark edge of Gothic Metal. The band's fifth album, 2011's The Unforgiven, saw Within Temptation gear their music even more away from the Goth influences, and focus on the Symphonic Rock/ Metal elements in stead. While some critics slew the band for its directional changes, others again praised the band for effectively combining elements of 1980s Pop, Rock and Metal (info culled from the band's page on Wikipedia, where this story is put in far more detail), and the album's reception was generally positive. Helleblad is not the only new member in the band, by the way! In fact, except for den Adel (and, in the background still also Westerholt), the only remaining original member is bassist Jeroen van Veen. Current lead guitarist Ruud Jolie came into the band during 2001, as did keyboardist Martijn Spierenburg. Current drummer Mike Coolen entered the fold in early 2011, but drums on The Unforgiven had been played by Swedish musician Nicka Hellenberg.

For their sixth album, the band reviewed their past releases, and brought back some of the elements they liked to write not only the fastest and most powerful albums in years, but also their most diverse, and collaborated with guests to secure that touch to the album. A preview of that was unveiled in September of last, when the band released the EP and video Paradise (What About Us?), which featured 3 album songs in demo stage alongside the title track...which is a collaboration with Finland's Metal diva Tarja Turunen. On the album however, the track “Dangerous” precedes “Paradise”, and finds a guest vocal role for Howard Jones (formerly of Killswitch Engage, now with Blood Has Been Shed). Also preceding “Paradise”, is the track “And We Run”, which features American rapper Xzibit, whom gives the track a touch quite unique in Within Temptation's arsenal of songs! A final guest comes on the album closing “Whole World Is Watching”, which features Dave Pirner of Alternative Rock act Soul Asylum. One thing coming back from the past, is the occasional growl [check the lyrically darker (a touch of Goth there!) “Silver Moonlight” - which also features a short spoken word part for an otherwise uncredited young girl – and in a lesser degree “Tell Me Why”], but of course the album's not only about speedy music. Most of “Edge Of The World” and “Dog Days” finds Sharon singing a ballad, for instance!

For possible music off the album, check the band's pages on facebook (plenty of short videos), MySpace (no idea what's on there), or Last.fm (sorry, didn't check). If you're already familiar with the band and just wanna get a quick impression of the new album, check the album's page on Amazon or iTunes! Alternately, you might go and check the band while on the European tour which starts in late February...but that would only bring the band in Belgium (Antwerp's Lotto Arena, to be precise) at the end of April! Can you wait that long?