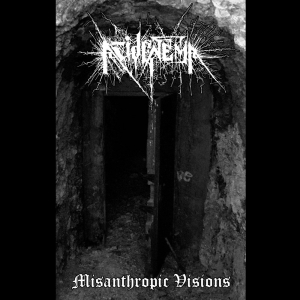 Acid Enema are quite an old outfit by Mr. Abhorrent, who also released material under monikers like Agape Christian Preschool in a very first era, and as Abhorrent, as well as Sangre, … Anyway, the first ones are related to Acid Enema. Under this moniker, he was active during the second half on the nineties especially, as well as the very early 2000’s, but then everything faded away into oblivion… Until now. Acid Enema return now, after almost one and a half decade (oh yes, there was a compilation in 2008, but that one does not really count), with Misanthropic Visions, which gets released on CD in an edition of 100 copies the independent way, and on tape via Legs Akimbo. The latter is also strictly limited, being 50 copies on black cassettes, and 50 ones in transparent red. They’re handnumbered, and quite professional in release (or whatever did you think about this label?...!).

On Misanthropic Visions (I have them all the time), Abhorrent was helped out by string player Noth Bloodstorm. Both of them did create something ultimately sweet, being labelled as ‘Blackened Speedcore for Despondent Souls’. Hell yeah! What they actually bring indeed is ‘blackened’ for sure. The vocals are a purest expression of evilness and disgust, hatred and violence. Abhorrent’s throat must be made of rusted titanium drenched in acid, I guess – truly impressive, I guess. The guitar lines too exhale the initiations of Black Metal. They’re quite necrotic in sound, the chainsaw-way, which refers to the old styled Nordic Underground approach from (more than) two decades ago. The Terrorcore / Speedcore-element, at the other hand, does not necessarily refers to the Old School. It’s like Gabber-Acid-on-Speed. The drum programming is a high-speed attack, brutally raging on 1,000 beats per minute (okay, I confess that this is a little exaggerated, yet still…). But Abhorrent’s programming goes further, with adding some eerie synth lines, industrial sequences, militant excerpts, and with making use of a couple of samples. Quite remarkable and unusual is the Pennywise cover Bro Hymn, though personally I do not think it has an added value.

On the B-side we’re blessed with bonus material from a rehearsing session in June 2015. It’s logical that the production is worse than the official / professional recordings on side A, yet still it’s acceptable. Partly because of the denser and muddier sound quality, and partly caused by the prominent guitar riffs, the material sounds quite more blackened. But for sure the blasting beats (666 Bpm, I’m pretty sure) play their important role with conviction. Most tracks eventually made it to the album itself, but there’s one that does not appear on Misanthropic Visions as well, being the great (and older) hymn Creation.

I think that those who liked acts like Metraton or Diabolos Rising will surely appreciate this full-force assault!