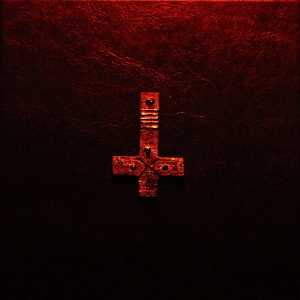 Listening to Halgrath’s Ritual Of Lost Epoch that made my brother mentioning the existence of this album. Blessings from the darkness – opus II, the second release of these two members of Corona Barathri, is an almost 75 minutes during trip to the deepest evilness of mankind. This is not an ordinary dark ritual ambient project, this is one long Satanic ambient evocation, based on the Luciferian lifestyle both members keeping up with.

Blessings from the darkness – opus II was recorded at the end of 2015 under the title De Spiritu Diaboli In Homini, but released in April 2017 by the Russian dark ritual ambient label Black Mara Records, after remastering the first recordings and adding 4 extra songs. In meanwhile they released late 2016 their ‘debut’ Homines Sacerrimi. Here we could already enjoy the dark sounds and drones of Affectvs (rus) and the evoking screams and haunting whispers of Lamia Culta (Ukr). This album takes you away in a long Satanic ritual like Corona Barathri or Shibalba. Blessings from the darkness – opus II is in the same line with an unseen extremity of the Luciferian ethos they can create. Like you are in the middle of the ritual, participating evoking demons and the horned God himself.

Opener Retson Retap leads us the way in a more than one hour apocalyptic journey, full of evoking chants, dark spheres and haunted screams. The whole concept of the album grabs you deep in your mind and pulls you in the deepest caverns of Hell. Verbum Portae Aperio is one of the highlights of the album. The spells and invocations supported by the omnious sounds of Affectvs and the haunted screams SATAN! SATAN! , as the beast himself has taken possession of Lamia Culta’s vocal cords. It reminds me at Abruptum on their Vi Sonus Veris Nigrae Malitiaes album. However I have to confess that even my Swedish idols cannot compete with the hellish evilness this obscure duo can provoke.
In Nomine Mali is accompanied with an empty sound where Lamia Culta seems to offer herself to the lord to receive all his powers. Manifestatio Ahriman is my absolute favorite of the album. The beauty and miscellaneousness of Lamia Culta’s voice surrounded by screams and deep growls and hollow sounds. It takes you in a hallucinating trip. Pure evil beauty.
But every song stands for his own. Not one moment I have lost the grip of this album. Like I said before, this is not an ordinary dark ambient album. This is a long satanic ritualistic journey. A devoted trip to all darkness and evilness. A trip of Luciferian ecstasy.

In good tradition of Black Mara records, the album is a real artwork package. The hand-made leather ‘magic book’ includes the cd, pictures and artwork, a guide to meditation and a detailed description of the album, a scarf with the sigil for meditation and a pouch filled with a herbal mix, called ‘the evil smoke’. Smoke it or use it as incense to get into the inner darkness to come into contact with the principle of the Antichrist. Unfortunately, I will never know because the album is already sold out. Still, the album is still available through bandcamp and absolutely worth to get it… at your own risk!

Check also out the newest release of Corona Barathri, a split with the awesome brutal metal band Sodomic Baptism!!