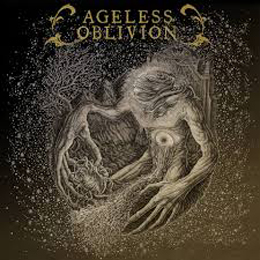 Hampshire, UK-based act Ageless Oblivion have never been my favourite Death formation, despite the enormous appreciation / influence / inspiration by so-called USDM-bands like Morbid Angel, Suffocation, Immolation, Nile, Hate Eternal or Dying Fetus. But with this album things do change.

First a short introduction, however, if you want it or not; I will just do so...

Ageless Oblivion were formed when Arkane, another UK-based Death Metal act, were put to rest. They recorded a first album in 2011, called Temples Of Transcendent Evolution (released on February 7th; review done by undersigned, and posted on February 3rd 2011; check out the Concreteweb’s Archive-section / tab if you’re interested; if not: *** yourself). After this release, the band performed live on stage with the likes of, for example, Decapitated, Dyscarnate, Fleshgod Apocalypse, Cerebral Bore or Conan, amongst others, and soon they wanted to record their second album. Once again, they did prefer to work with notorious producer Chris Fielding at his Foel Studio (Neuroma, The Wounded Kings, Cnoc An Tursa, Primordial, Winterfylleth and many others). This, of course, resulted in a gloriously magnificent and magisterial sound quality. It’s not too poppy or clean at all, yet decently proper and ‘full’ in every aspect (mix, balance in between the individual contributors, etc.).

Penthos goes on in the vein of the past, yet with one huge difference: the average quality of the individual compositions (and as a result, the album in its totality). This quality did increase enormously! (almost) every track stipulates the essential basics it needs: great riffing, monstrous vocals, technical breaks and well-thought tempo-changes, dissonant rhythms, duelling leads, and an execution that defines this new century’s distinctive approach. Besides, when the former material was mainly based on the bands’ influences, this album shows more of an own, self-created inventiveness.

The average duration of the tracks is pretty lengthy, but because of the decent performance, as well as the variation (in speed and structure) per individual song, Penthos isn’t an impossible mission to plug through. And what’s more, some tracks, like Where Wasps Now Nest or Penthos: Lament, are going further than ever before. Different types of brutality go hand in hand with integer passages (the latter even including acoustics and Doom-laden atmospheres, sludgy drones and female voices, ambient synth-passages etc.). And in general there are less blasting and ‘mechanical’ pieces, whereby the general ethos sounds more organic.

Indeed, the basics on Penthos are very Ageless Oblivion-through-time, but the details are way more amplified, magnifying the needful, necessary variation (which I sort of missed in the past).

Consider this a mixture of Decapitated, Suffocation, Calm Hatchery, Hour Of Penance, Centurian, Nile, Black Dahlia Murder, Neurosis and Cult Of Luna, and you might have an idea what to expect…