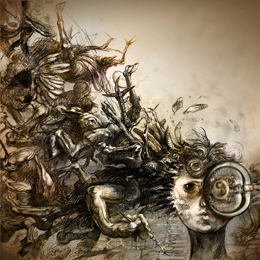 I have been so lucky as to be able to follow this Canadian band since the release of its debut album Once Only Imagined (review posted 06/09/2007). Already a stylistic sensation on that record, the guys (and frontlady) improved on their style for the sophomore album Lullabies For The Dormant Mind (review, again by yours truly, posted 01/02/2009) and, frell me, if they did not go through yet another progression since! And that this progression is definitely a positive one, is something I want understood from the get-go...so we don't get any mistake in about that, okay!? Blueprints for the album were originally penned by guitarist Danny Marino and frontlady Alissa White-Gluz, and then further fleshed out by the rest of the band. A process which the band already used on the previous material, with that difference that this time around the band took far more time on each song separate in the rehearsal room and pre-production phases.

The music is therefore even more action-packed than before, with great complexities at every turn and twist...in the heavy parts (which, as before, are a mixture of Grindcore, Thrash, Black and Death Metal). Because, if you ask me, this new album has more acoustic parts (very beautifully played too, but far more simple than those heavy parts of the music) than its predecessors. Still, the music was overall complex enough for two of the producers working on the pre-production, to tell Alissa she was crazy to think she could successfully write lyrics, especially clean ones, over the songs. Well now...she díd that anyway, didn't she? In spite of how discouraging those comments were at the time, she went ahead as usual, surmounting the huge frustrating challenge at hand. And I'd say she done it more than successfully! I mean, there's even a children choir included in the track “Predator And Prayer”! As always, the album has a couple of moments where the rough and clean vocals overlap, but I'm sure the band has a way to deal with that during live performances. Live performances...in the time in between albums The Agonist has shared stages with everyone from Dark Tranquillity and Overkill to Otep and Epica, bringing a somewhat “epic, dramatic” stage show. Those days are over with now, as the band is determined on bringing “...a more ballsy, raw and vicious performance...” dixit Alissa, who continues, “I'm personally less concerned with being 'pretty' now as much as I seriously want to get into a fist fight every night. We all go on stage every night ready to attack and getting hurt. Falling over, puking and bleeding are all the things we are getting used to.”

Well now, doesn't thàt sound nice? If you hadn't heard of this band before, then by all means check out the audio and video available at the band's page at (www.) myspace.com/theagonist. My apologies for having the review posted so late, but both professional and personal events in my life prevented me from doing what needed to be done. To conclude this review, let's state that Prisoners was already added to my 2012 year-lists when I first heard the album, somewhere in mid-August of last year.