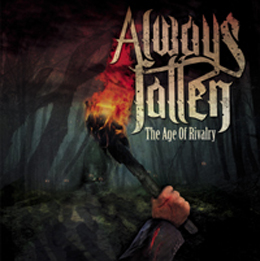 Always Fallen is an industrious young Belgian Thrash Metal band that was founded in the summer of 2005. After writing and rehearsing for almost a year, the band started playing live gigs, in February 2006. After a minor line-up change consisting of lead singer Kenny Devos whom at that point joined the band, they released their first demo entitled No Mercy for Sinners upon the public in February 2007. Nearly exactly one year later they released the mini-CD-album See my Blood.

This got them a fair share of attention, so they couldn't resist releasing another album upon the Belgian metal scene entitled The Age Of Rivalry. Which is actually a well-chosen title, when you consider the rivalry between bands these days. But let me assure you, these guys don't need to be afraid because they are awesome.

It has great metal riffs, but with melodic touches here and there. And well, let’s be honest, the songs are brilliant, considering the band comes from Belgium. This is definitely something to keep an eye out for.