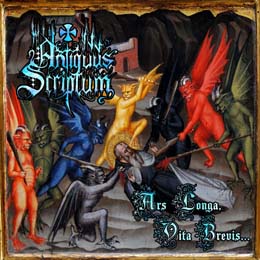 Antiquus Scriptum were formed at the end of last century by Jorge ‘Sacerdos Magus’ Magalhães, after he left Firstborn Evil. He had some ideas for quite some time that didn’t quite fit to the style of Firstborn Evil, so he took the decision to leave (somewhere in 1998) and to start his own (solo) project. After the recording of some demos, he signed to Ophiucus Records in order to release the Antiquus Scriptum-debut Abi In Malam Pestem in 2002. In 2008, the very same label released the sophomore full album, Immortalis Factus. Both of them have now been re-released via the current label Antiquus Scriptum are signed to, Pesttanz Klangschmiede. The reviews on both re-releases, for your information, will be available very soon on your beloved Concreteweb-site. In 2010 there was another full length, Conclamentum Est, released via Talheim Records. But first this one…

Ars Longa, Vita Brevis… (meaning something like ‘Art is long, Life is short’) was recorded at the Mosh Pit Studio once again, and partially at Studio 13 as well, respectively by long-time collaborator Nyx Sludgedweller (once again this Vieira-guy acts as session musician too, besides production and mix) and Melkor. The album is divided in two parts. The first one, called Capítulo I - A Arte É Longa, consists of newly written tracks, the second one (Capítulo II - A Vida É Breve) consists of one new and three cover tracks.

The material is comparable to the former efforts, but it does give another point of view, another angle. Still it stands for fast, rhythmic and energetic Black Metal with both atmospheric and harsh passages, but there’s more groove and bigger balls this time. The presence of keyboards is still heavily important, and so is the variation in tempo (in this project’s case truly great). So what’s different besides the heavier balls? Well, the vocals, to start with, are now of a mostly irritating kind, but they are so enormously irritating that they do really please me. For this project has a certain passion for Bathory, I am glad, and thankful, that the voice is that false and even bitsy. Quorthon wasn’t the best vocalist either, was he? Anyway, the first track, Primordium / The Skeptic Beholder (which lasts for more than seventeen minutes, by the way), defines everything Antiquus Scriptum stand for nowadays. This epic contains all elements that characterise Ars Longa, Vita Brevis…, and if you like this track, you will like the whole album; if you do not, you’ll hate what’s to come. Besides the epic Black majesty (not of the Nordic kind, miles away from the Second Wave-scene, yet truly old fashioned and spitting on modernism or trendy nonsense), there’s the addition of Folk / Pagan-alike grotesquery, ambient atmospheres (not of the cosmic or melancholic kind, however), bombastic symphonies and occult Death Supremacy, so you can imagine what’s yet to come…

In between the aggressive outburst, there are some symphonic, folksy, and even Gothic-alike intermezzos, and in this case they do just fine. They are some point of rest in between the powerful Black / Thrash outbursts, and at the same time they continue the inherent eerie obscurity and mystic grimness of the metalized pieces.

Like all former albums, this one too is one you need to explore several times before getting the whole concept. It might be a challenge, and you might not enjoy it, but I am sure some of you will simply adore this experience. I for myself dare to say that Ars Longa, Vita Brevis… is the strongest Antiquus Scriptum-album to date, but who am I to do so. But you might, pardon me, you must give it a try.

Additional info 1: imagine a mixture of very old Moonspell, Bathory’s Viking-era, and French project Daemonium / Akhenaton, and you might have an idea of what this album stands for.

Additional info 2: the theme of In The Kingdom Of Superstition is based on a The Firstborn-song (pre-Firstborn Evil), slightly re-arranged and with new lyrics that fit better to Antiquus Scriptum’s lyrical themes.

Additional info 3: there is a hidden track, untitled I guess, at the very end. This ritual chant is rather of the Tibetan-shamanistic kind, but within this album’s constellation it does fit. Additional info 4: the second part of the album consists of some cover songs, as mentioned in the first paragraph.

There’s the quasi-funky/punky reinterpretation of Ratos De Porão’s F. M. I., the epic-paganized cover of Era De Noite E Levarum by Zeca Afonso (and now I do have to admit I never, truly never heard about them, but it does sound pretty interesting!), and a great version of Xutos & Pontapes’ Quando Eu Morrer - but these tracks do NOT fit to the album, and it makes me really confused (and I do not like being confused this way).