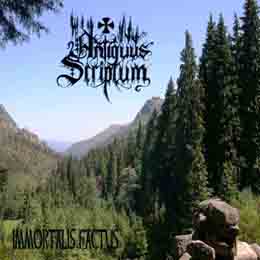 Antiquus Scriptum were formed at the end of last century by Jorge ‘Sacerdos Magus’ Magalhães, after he left Firstborn Evil. He had some ideas for quite some time that didn’t quite fit to the style of Firstborn Evil, so he took the decision to leave in 1998 and start his own (solo) project. After the recording of some demos, he signed to Ophiucus Records to release the Antiquus Scriptum-debut Abi In Malam Pestem in 2002. In 2008, the very same label released the sophomore full album, Immortalis Factus. Both of them have now been re-released via the current label Antiquus Scriptum are signed to, Pesttanz Klangschmiede. The review on Abi In Malam Pestem, for your information, will be available very soon on your beloved Concreteweb-site, the one on the new album, 2013’s Ars Longi, Vita Brevis… has been posted on July 13th 2014.

Sacerdos Magus once again worked with several guest / session musicians, including several that collaborated on the debut full length too (like the Vieira-brothers, or female vocalist Claudia ‘Vampiria’ Ferreira from Doom-act WinterMoon). Also qua approach, this album goes on in the vein of the debut. It’s like a dramatic, tragic journey through spheres of dark, desolate emotions, yet translated, aurally, with a spirit of refound courage, brave epic and convinced warlust. As a matter of fact, the opening track Procemium / A Viking Belief says it all. It’s the longest track with its sixteen+ minutes of duration, but it does exhale the summary of the whole concept: Pagan-laden, orchestral and melodic, maybe slightly catchy and little gothic Symphonic Black Metal. It holds the middle in between the extremes of speed (from pretty slow-tuned to blasting fast), melody (from spherical to violent), and atmosphere (victoriously Epic versus submissive integer, and everything in between), but it truly sounds like a professionalised edition of the debut (cf. the third, full length, of which I spoke in this review’s introduction, that was, once again, another step forward in this project’s evolution).

Like many Lusitanian hordes (or, in a wider sense, Iberian combos), this band too finds its inspiration within Celtic / Viking-inspired themes. As an ‘amateur’ of historical bullshit (no further comment, but if only you could imagine my eye-cue, er, I mean IQ… Hahaha…), one might recognize the reason(s) why those tribal grotesqueries are permanently returning themes, both lyrically as musically. With Antiquus Scriptum this statement is not different either. Anyway, what I want to say is that the band’s inspiration is based on the origins of the Scandinavian scene, as well as on those of the Spanish and Portuguese one. And when it comes to the latter, the Iberian influences, I think the many folksy / ethnic-based additions cannot be ignored; that what distinct this act (amongst that of many colleagues) from the Norwegian or Swedish scene). Nice too are the intermezzos with Ambient, Folk, Gothic or Symfo-based structures, which are a nice contra-balance to the energetic, rapid Metal-pieces.