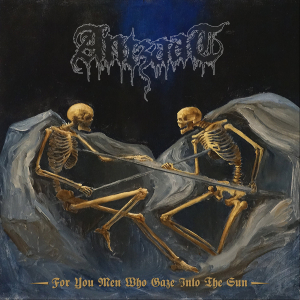 First a very brief discography / biography. Antzaat were formed in 2015 and did release The Black Hand Of The Father (link: see below) in 2017 by the upcoming Belgian (Black Metal) label Immortal Frost Productions. No thanks; now you’re completely informed, dwelling in spheres of knowledge, in unlimited wisdom with me…

You know, I am just joking, but I think the aural side is the most important aspect once more. But it isn’t but fair to say that this act consists of Ronarg on vocals and lead guitars, Eenzaat (drums), Isaroth (bass guitars) and Nihil (rhythm guitars). Important to know is that Ronarg is part of the Ars Veneficium line-up too, which also includes Mister S. as vocalist – this one being the very same guy that runs Immortal Frost Productions. You see, there sort of is an incestuous thing going on somehow. Anyway, alle gekheid op een stokje, Antzaat did release that first effort, as mentioned above, via this majestic label, which was hailed and praised all over our oh so beautiful globe. And let’s be honest: that mini-album indeed contained all elements to satisfy the ‘orthodox’ Black Metal purist. Actually, I was sort of ‘sad’ (an emotion that was told to be normal for human beings, so eventually I did accept this explanation) that this band from Antwerp (actually from an area where my wife originates from) seemed to exist no more. But then, suddenly, Immortal Frost Productions announced a new effort by this quartet, so you can imagine my arousal. That one is called For You Men Who Gaze Into The Sun, being released on compact disc (in an edition of no less than 1,000 copies, with an eight-page booklet), as well as on some limited twelve-inch vinyl editions (and, of course, via the contemporary digital sources).

This first official full length by Antzaat (it means something like ‘against’, as in ‘against the others’ or ‘against law’) lasts for three quarters of an hour, and it was recorded in the city of Herentals (CC Zwaneberg, ideal for huge orchestrations), plus mixed and mastered once again by the famous Mister Owe Inborr (not a stranger at all to the label involved for sure!) at his famous Wolfthrone Studio. The better part of the artwork was done by frontman Ronarg, and damn, that cover artwork is so sexy! The general layout, in case you might care, was done by WrathDesign, the visual outlet of The Stone / Oculus / Kozeljnik sweety Marko Jerkovič, who cooperated with Immortal Frost Productions a couple of times before, in a recent past. Besides, The Stone will soon release their new (ninth, I think) album via this label too.

It is not unusual to start with an intro (actually, starting with an outro is rather stupid, so somehow it makes sense), yet this one, ingeniously called Intro, is a remarkable one. Not an acoustic thing this time, or a slowly-building-up symphony either. Intro is like a semi-divine, classic-alike piece, performed on organ (or at least, it does sound like a church organ), breathing melancholia and, at the same time, something that would not suit ill to an introduction for a Neo-Folk album or live gig. It’s risky, but it shows bravery as well for using this kind of melody / instrument to introduce a first official full-length. For sure it does draw attention.

But the real ‘raison d’être’ of For You Men Who Gaze Into The Sun takes off with Between The Beginning And The End. This is a five-minute thunderstorm which immediately reminds me of those glorious days when Scandinavia conquered the world with their Second Wave majesty. I am cautious this time while mentioning the ‘Scandinavian’ scene, because Antzaat go further than just playing ‘typical Norwegian’ or ‘deeply Swedish inspired’ Black Metal. This track (and more are to follow) proves that Antzaat take inspiration from a general approach that characterizes the scene from Norway and Finland somehow, yet with a trans-European approach too. The focus lies on the guitar melodies in the first place; tremolo riffing that accompanies the listener to a mental state of mesmerism. What strikes me is the decent sound quality. The Wolfthrone Studio is a very professional place to record, as you know, but this time the result is very high-leveled. I adore the grandiose mix, for every single aspect can be found back without the need to search for it. The bass lines are an example, for these ones 1) are clearly audible and that’s a great thing because 2) they are played with a true craftsmanship. Anyway, Between The Beginning And The End brings high-qualitative drum-work too, which works well within both the slower and the faster fragments of this composition. Sometimes it’s like an avalanche of thunderous beats, unstoppable and uncompromising, then again the patterns are like a main ‘melody’ themselves. And Ronarg’s vocals (in Ars Veneficium he plays the guitar) are of the ‘emery paper’ kind: a raw throat with a rusty barb-wired tincture.

There is quite some diversification in tempo. Most pieces are pretty fast, including some blasting fragments and some decelerated ones too. It is evident that the transition of tempo changes and breaks is brought in a mostly organic way. Pieces like Man Made Flesh Made God Machine, Crown Of Concrete (concreteweb?) or And This Day Shall Come Again have that full-force energy, which goes extremely well with the highly-melodious fundaments. Heavily supported by a monumental rhythm section, the combination of kinetic strength and epic melodies turns out to be a satisfying adventure. That balance of aggression and atmosphere, of pounding harshness and crafted elegance, is really, really pleasant to experience.

Once in a while, the experience slows down too. Through The Eyes Of A Rotten Mind has a couple of doomed fragments, which add an intriguing level of obscurity. Listen to those great bass lines during the slow fragment(s) of this song (amongst others). Yet several other chansons (?) have these moments of deceleration, finely interacting with the fierce moments of intensity.

In some way, Antzaat come up with an epic approach. Tunes like Radiant Fire (what a killer drums!), the title song (another prove of technically high-standard ‘knowing how to handle your instrument’ expression) or higher-mentioned Through The Eyes Of A Rotten Mind breathe that proud and victorious character that typified / typifies the so-called Nordic trend with conviction and courage. It’s not of the Folk / Viking kind, yet a vengeful attitude is not far away at all.

For You Men Who Gaze Into The Sun surely lacks originality. This band has not the intention to bring something renewing or progressive. If that’s a problem, then it isn’t but your problem; not mine, because I don’t give a damn about being original. As long as 1) you do not sound like a cheap copycat, and 2) the (non-original) result is of a high qualitative level, a ‘true’ (Black Metal) ‘fan’ won’t mind. And that’s exactly the dimension where Antzaat dwell. They are not cheaply sounding like their sources of inspiration and their song writing plus execution is of a very satisfying height. Conclusion: if you can appreciate the likes of -and this is a general description, yet a fitting one- Mgła, Drudkh, Sargeist, Azaghal, Wolves In The Throne Room, Uada, Horna, Gorgoroth or Behexen (and why should I omit to mention Ars Veneficium or Enthroned?!), then For You Men Who Gaze Into The Sun is surely something to take into account.