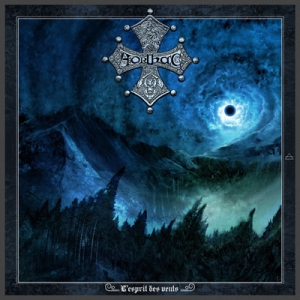 Aorlhac are an act from France, and more specific from Auvergne and Aurillac. The band is named after the (old) Occitan name for the city of Aurillac, and must be pronounced as ‘our-yuck’ or something. It’s the Occitan history too that inspires the members, and the rich heritance of this region’s history. Aorlhac were active in between 2007 and 2010, and they started a trilogy about their roots. It started with A La Croisée Des Vents in 2007 (Eisiger Mond Productions, re-release afterwards), and the second chapter was La Cité Des Vents (Those Opposed Records, also re-released afterwards). In that era, the band released a compilation and a split too, but then they did, unfortunately, split up.

Enter 2017. Some of the original members decided to reanimate the band, and soon the work in progress was focusing on the final chapter of the trilogy. Soon it took form, and the mutual exertion results under the name of L’Esprit Des Vents (meaning ‘the spirit of the winds’). It lasts for almost one hour, and gets released in an edition of 1,000 digipack copies via one of my favourite labels from France, Les Acteurs De L’Ombre Productions. There is a vinyl edition too, being a double-LP, via the very same label.

A short notion about the ‘sung’ mother tongue. It’s French, and you will like it or you do not. It has nothing to do with ‘understanding’ (I do not speak Portuguese or Romanian, for example, yet still I can appreciate bands from out there that sing in their mother tongue), but it might bother. However, I think it has something almost exotic in this band’s case – okay, I do understand French too, being a smart human being from Flanders – yet still it sort of fits. Why not, anyway; there are multiple of comparable bands around… Besides, it might invigorate the punkish attitude, which is undeniably present.

The album, from sonic point, brings rather fast, rhythmic, melodic and traditional Black Metal, brought with a marvellous production. The sound quality is more than decent, with a great equilibrium for all players involved, a lack of irritating background noise, and attention for all individual aspects, gathered as one organic totality. Maybe, just maybe, the vocals might overrule the whole concept from time to time. It’s not any ‘traditional’ form of blackened screams, yet rather an angry form of pissed-off shouting (it does remind me of some grunting Hardcore throat, for what it’s worth). And the prominent artillery drum patterns too might suck too much attention, I think. But eventually, the whole concept remains, because of the many great details: harmonious choirs (enjoy, for example, the bathorian chants in Infame Saurimonde), the epic leads (often of the tremolo-kind, inspiring, intriguing and impressing – from time to time even NWOBHM-oriented, like in Mandrin L’Enfant Perdu), or the nice additions, like the use of bag pipes or Doom-aspects (and, as said before, the use of the French language).

For a Les Acteurs De L’Ombre Productions release, L’Esprit Des Vents is enormously catchy. Epic and melodic, okay, but this material stands (far) away from the obscure approach that characterises most of the other bands involved. Does it matter? Of course it does not; it’s just an objective (and at the same time subjective) remark to make. However, this epic recording constantly grows, surprises, evolves and teases, and the vivid vigour is more than entertaining.