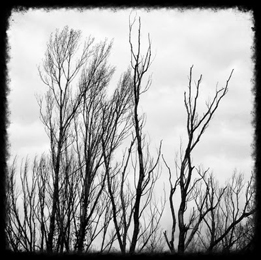 Distant Voices are a very young label from France, but for sure it is a special one. Premièrement it has to do with the musical direction, i.e. a mostly underground-oriented kind of grim, depressive, ambient, melancholic and / or atmospheric Black Metal. Je l’adore! But there are more labels that do so. What does distinct this label from any other is the time-intensive care the crew takes for each single release. All of them are made with fine, soft paper in order to deliver a unique creation; let’s call it a total-package for combining wonderful aural excellence with visual art. It’s rather evident, as you do understand, that every release is limited to a small edition.

The label had its first release at the very end of 2012, which was the debut for mysterious French act Arbre, with the ingenious title I. Now we can enjoy the second Arbre-full length (the fourth release on Distant Voices), entitled, indeed… II, and this one is limited to an edition of seventy six hand-numbered copies only. There will be no repress! The handmade package includes black carton-insert with leafless branches as drawing, and this truly gives an idea of what the sonic result might be.

The titles on II continue where those on I ended, i.e. VIII up to XI. …makes it only more mysterious, not? Those four titles last for about fifty five minutes. Opening track VIII starts little ominous, with a crispy sound (including field recordings that appear throughout the whole album), soon followed by horrific synth lines. After two minutes, this evolves with the presence of eerie guitar lines, which does nicely introduce the core of Arbre’s raison d’être: performing evocative, wintery yet violent Atmospheric Black Metal. The bleak track is melodic and dramatic, based on slightly repetitive guitar lines and distant voices. Hehe, what a coincidence… No, seriously, the high-throated screams sound as they come from far away, from beyond any abyss, from another dimension.

This has to do, and then I am coming to a point of negativity (but it surely is the only negative remark I can make): the inferior sound. This kind of material is allergic so clinically polished decency, but in this album’s case, the mix is not satisfying at all. It is impossible to differentiate the string chords at the back ground, the percussion patterns sometimes fade away when they are not meant to be gone, and the aural black snow (aka ‘noise’) might bother, even irritate. Also the vocals, as mentioned, are sometimes nearly audible. That’s a pity. It is not the case throughout the whole album, for especially the floating atmospheres fit perfect to the unpolished tang. The opening riffing on IX, for example, is granted by such tones. Lo-fi can work both ways, yet it needs cohesion. X and XI are very much the same (oops, here’s another remark, though not necessarily negative: the very-much-the-same-approach of all these epics…). But this solitary journey amongst the labyrinths of Mother Nature (I admit: I’ve stolen this phrase from the label’s site…) is a true experience only to be adored by each dark-souled entity that embraces inner desolation, mental hypnosis and grim aural pleasure.