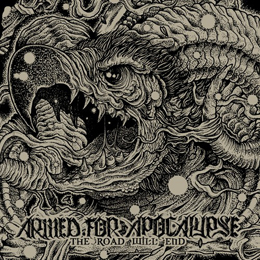 This up-and-coming CA band pounds out fairly lethal sludge metal in the sick and creepy style of bands like Valume Nob, Fleshpress and Fistula. The band sounds especially heavy plowing through some crushing grooves at mid and slower speeds. It's not all slow, though, and little bursts of speed often accompany chop changes. Modern sounding, fuelled by adrenalin and delivering a definite stomp, the riffing is reminiscent of EyeHateGod style groove, and the vocals are the pure, unadulterated, agonized screams of Neglected/Cavity/16/Crisis origins. So the threesome vocals by Kirk Williams - guitar, vocals, Cayle Hunter - guitar, vocals and Corey Vaspra - bass, vocals are more of a hardcore shout, it's a pretty consistent shout all the way through, which is actually the only detrimental thing one can say about The Road will End. I'm sure the vocals have an immediate appeal to most fans of the sludge metal genre.

Armed for Apocalypse have established themselves as a band to watch and this album is certainly one of the better sludge surprises of this year.