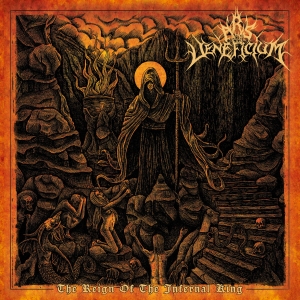 Two years after their great debut EP The Abyss (you can still read the review posted on March 26th 2015; just enter the band’s name in the ‘search’-tab on top at the right), Belgian combo Ars Veneficium, an outfit that includes Immortal Frost Productions’ label owner S., return with the debut full length album. I did truly adore that first effort, and it was not just a lucky shot. In 2015 the label did release a split-EP from the band with mighty Finnish horde Azaghal too (review published on December 24th 2015), which proved that Ars Veneficium are a combo to be reckoned with.

And recently, indeed, we could experience the release of The Reign Of The Infernal King; as said, it is the first full studio album by these poison artists. From the latest Eratomania line-up (Ars Veneficium should be considered the successor or that band; for more biographical info, I’d like to refer to my review on The Abyss), Ronarg (guitar player and music writer) and S. (vocals and lyrics) are still present, and this release welcomes some new members too. And before focusing on the aural side, first some short additional info. Everything had been mixed and mastered at the Finland-based Wolfthrone Studios (think: Ondfødt, Pimeydentuoja, Nidhugg, War Hammer and more), owned by Ondfødt’s frontman Owe Inborr (they too are on Immortal Frost Productions’ roster). The result lasts for forty-two minutes, and it got released in an edition of 1,000 copies on compact disc (half of these in a special slipcase edition). In a couple of weeks, the album will come in a vinyl edition as well via the very same label, and there seems to be a tape-version too via the young German cassette-only label Worship Tapes. The great artwork was created by Ophidian Coil’s Opposite Artworks with, once again, lay-out assistance of long-time collaborator Moornebheym.

The Reign Of The Infernal King opens with a quite short (one minute +) and untitled introduction, but I assure you: the sonic side of oppression and obscurity immediately overpowers everything. But that isn’t just an omen for much more evilness to come! Quite fluently Intro transforms into Damnation Of The Soul, which penetrates one’s eardrums immediately with fire, sulphur and venom! Damn, like a speed-up bulldozer gone crazy, Ars Veneficium create a massive yet majestic wall of sound, being punishing and torturing your consciousness. it’s like a pyroclastic eruption, a monstrous power of sound. Haunting guitar and bass melodies are heavily supported by maniacal drum patterns and, above all, that demonic throat of ‘singer’ (hehe, what a lapsus) S., making acts like Dark Funeral sound like a bunch of high school teens (no offense, for I do appreciate those Swedes a lot; I just want to make a point with this – evidently fabulous and creative – comparison, okay). After just over a minute, everything turns slower, yet without losing that asphyxiating energy. In such excerpts, the slower ones, it gets clear that the necrotic and chainsaw-alike sound quality strengthens the misanthropic and blaspheme message and attitude. Somewhat confusing at first, yet quite cool, is the primal solo towards the end of this piece, paying tribute to the legacy of the glorious First Wave. Within the very same comparable vein, the album continues spreading a message of hatred, anti-humanity-attitude and warlike propaganda. Quite convincingly continuing the former efforts, this album combines harshness and heaviness with intelligently created song structures and a monumental, monolithic execution (+ colossal sound quality). Yes, still it lacks of originality, with an overload of influences, to my opinion, from the Swedish and Finnish scene. But then again: what the Hell??? Since the result is way above the average, I puke on ‘being original’! Besides, lacking originality in this case goes hand in hand with professionally written songs and quite some excellent additions. Take those tremolo leads, for example, in Angel Of Angels (a track that also includes superb bass lines, believe me!), or the many subtle yet organic tempo-changes throughout the whole of the album.

Seriously, there is so much to experience on this newest Ars Veneficium recording, though I repeat that there is nothing that renews the memories of the past (for those who care). The whole album is a collection of professionally composed and executed Black Metal hymns in the glorious vein of the Mighty Nineties, yet with a timeless conviction on top of it. To my opinion, and I know that this isn’t but personal (but then again, hey, I am the reviewer, so I can write whatever I want), there are no highlights on this album. But it actually means that each single composition is of a highly convincing level, each of them being superb in structure, melody, equilibrium in tempo and / or atmosphere. The cohesive play of the members, the few additional samples (I think it’s a great addition, actually), the change in speed, the sublime sound quality, and so on, it makes this album a recommendation, once again, for all ‘fans’ (damn, I actually despise this word, but whatever…) of pure right-in-the-face Black Metal in general, with that subtlety of the nastiest Swedish scene included for sure!