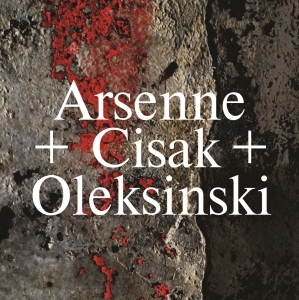 The Russian label Frozen Light isn’t known for their (Black) Metal releases only, since they do have quite some Noise / Ambient / Industrial / Drone projects on their roster as well. A new release is the result of a collaboration in between three Post-Industrial musicians, being Frenchman Arthur Arsenne (guitar, loops, fuzz microphone and joystick oscillator; he took care of the photography too, as well of the mastering; he’s the guy as well who runs the labels Death Carnival Records and the new label Arsenic Solaris, and active in Mitantecuntri and solo-outfit Lands Of Conifer) and two guys from Poland, Piotr Cisak (bass, vocals, effects) and Paweł Oleksinski (guitar, vocals, effects). Both Polish colleagues did work together several times before, by the way.

The trio did record four lengthy pieces live in the city of Nice, France, at the White Room studio. The result is a fabulous collection of aural experiments that do impress as from the very first note until the very end. It gets released via Frozen Light in an edition of 300 numbered copies, including an eight-paged booklet with artwork composed by Olga Matveeva, being strongly related to the Frozen Light-staff and releases.

The untitled album opens with the track {1} (not kidding!) (16:15 minutes of length, yet still not the most lengthy creation on this album), which starts (and continues) in quite a hypnotic manner. This kind of Drone / Ambient-laden material brings quite some Consouling Sounds efforts to mind as from the start, and that (great) feeling goes on throughout the whole journey. Spacelike sounds, eerie guitar lines, dreamlike synth loops, haunting field recordings and psychedelic riffing are gathered to create a mostly mesmerizing soundtrack, trespassing the limitations of the scene. Softly hidden electronic devices, Post-oriented structures / sounds and, especially, the addition of cruel voices create a rare yet mostly intriguing atmosphere that grabs the listener’s attention for sure. It’s unique how easy it seems to create such multi-dimensional effort!

The second creation, called ø (15:18), is much darker in atmosphere and execution. Still based on the so-called field-basics, and focusing on transcendental and mesmerizing sound(scape)s, ø rather balances on the fragile border in between eerie Dark Ambient and a flair of apocalyptic Post-Industrial (à la the Canadian scene). Actually, it sounds less transcendental and more down-to-earth (even underwordly?), with, towards the end (as from eleven minutes) those mystic –why not: Americana-injected– guitar tunes and acoustics.

The composition (3) then again (17:03) comes closer to the ‘traditional’ Death-Industrial trend with its samples, effects and noises. Besides, this piece is much more horrific and oppressive, utterly evil, malignant, suffocative! Massive guitar drones, haunting synth passages, grim voices, bleak sounds – (3) surely shows this project’s most malignant and malicious existence. This track might be the most perfected definition of how a nightmare can be expressed the sonic way. But it makes you wanna dream along…

The fourth and last piece, ¶ (09:11, and therefore the sole ‘song’ beneath ten minutes), mingles noisy effects, industrial drones and ambient soundscapes unto another haunting, little scarifying and post-dimensional journey through spheres of mental existentialism and nihilism at once. In contradiction to {1}, ø and (3), ¶ turns out to be the most zen-alike piece, despite the breath-grabbing approach, and the least drone-hammering as well. Yet still one cannot ignore the asphyxiating, ominous and mostly uncomfortable attitude, and despite lacking the Aidan Baker’ish elements from the first pieces, this one is at least as interesting.

Piotr and Pawel did work before many times, but within this constellation, which includes Monsieur Arsenne, they did create something magnificent, something that trespasses boundaries, limitations, narrow-mindedness in all aspects. Super(b)!