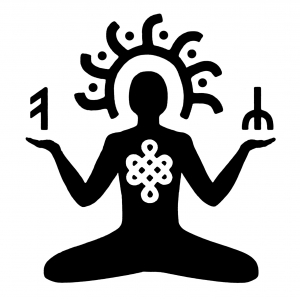 For about fifteen years, Alexander Ivanov spreads his message about multi-culturalism and tolerance by means of his project Aryan Art (amongst some others; but this one surely is his most active, prominent and prolific one). He wrote and recorded, mixed and mastered the material for this new album, Хармония - Вечност - Вселена (Kharmoniya - Vechnost - Vselena), as from 2013 until 2015, in co-operation with Flamen / Warnungstraum frontman Bartlett Green (Alexander once used to do some guest vocals for Bartlett’s defunct Italian project Warnungstraum).

This five-track album lasts for forty one minutes and opens with the short instrumental introduction Взор (Прозрение), which sort of expresses the oriental artwork too – look and listen, and you’ll get it. But as from Живот (Сенки), Aryan Art perform their raisin d’être, i.e. highly varying yet mostly epic and paganised Black Metal, melodious, proud, traditional and timeless, yet pretty much characterising this project.

The material on Хармония - Вечност - Вселена is quite diverse as it is coherent in atmosphere. Faster parts interact organically with slower ones, and hypnotic melodies go hand in hand with merciless outbursts. In general, the hole is based especially on high-trem guitar riffing, being fabulous guitar melodies taking a leading role within the whole concept. All this gets convincingly supported by a modest yet highly supportive rhythm section and conjuring screams. There is a nice equilibrium in between all kinds of speed, being balancing in between rather slow, over mid-tempo to energetically fast, yet never losing itself in one or another exaggerated blasting outbursts nor funereal doomy deceleration. Besides, there are a couple of nice acoustic passages, but they surely are not of the predictable, pathetically poppy kind, yet rather performed as a unique strength to empower the natural conviction of this project’s essence (which is, as you might know, based on the persuasion and pride of black / white purity – delete as appropriate). Besides the highly melodic guitar passages, the floating, spherical keyboard lines are of a non-deniable importance to define Aryan Art’s subtle atmospheres. But actually it is the wholly combined result that leads to creations that are intriguing and still malignant. It’s quite incredible how natural it seems to combine floating and mesmerizing melodies (cf. everything that might sort of seem a bastard offspring of Raventale, Hellveto, Ered Wethrin and even Summoning – I admit: this is quite a ‘large’ comparison, but just imagine…) with that hateful, uncompromising attitude, and still maintaining a specific grandeur of craftsmanship.

Despite the fact that the lyrical themes are lass hateful and nationalistic, the Aryan persuasion gets maintained. Let’s call it a matured evolution, lyric-wise, combined with a logical evolution sonic-wise. Or: Хармония - Вечност - Вселена surely defines Aryan Art’s grand existence, and therefore: hail!!!

No more words- just this: impressive once again!

Finally this: besides the CD-edition, there is a vinyl-one too in mean time (as from January 1st 2016), in case you’re interested…