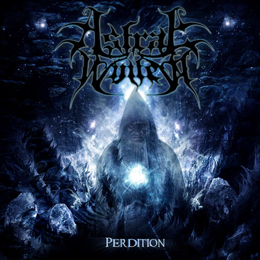 At around the same time, Belgian label Immortal Frost Productions releases two albums from Australian soil, one from Atra Vetosus (Voices From The Eternal Night; the review will be posted in a very near future, so look out), as well as the new album by Astral Winter, a solo-project of Josh Young, who is part of Atra Vetosus too (and for your undeniable important information: Josh, aka Slitver, joined forces with Immortal Frost commander-in-charge Surtur in a mutual project called Hammerstorm). When it comes to Astral Winter, there was the demo in 2009, which actually was the very first release on Immortal Frost, by the way, and in 2011 the collaboration in between both of them (the Flemish label and the Tasmanian project) resulted in the release of a first full length album, called Winter Enthroned. Unfortunately, both demo and debut full length are sold out, so let’s hope for a repressing.

Perdition, the sophomore Astral Winter studio recording, was recorded entirely by Josh Young at his Dawnless Studio in 2012. Not only he wrote all music, and did he perform all instruments (and vocals); Josh took care of production, mix and mastering as well. The album is almost fully instrumental, and based on a softer approach. Gone are the Metal elements from Winter Enthroned, gone are the vocals / lyrics. Perdition gets introduced, for example, with The Rain Falls Upon This Distant Land, with its fundaments around acoustic guitar melodies, supported by atmospheric synth ambience and sounds of nature (i.e. wind and distant storm). An Endless And Vast Horizon also comes with acoustic guitars and nature sounds, but this song concentrates on piano melodies especially. It’s neo-classical, even slightly Dark Wave-oriented in its approach rather than Dark Ambient, but the border is very shadowy, and therefor slightly otiose. The compositions aren’t deeply delving into spheres of Utter Obscurity, yet rather ethereal or celestial; but this does not mean boredom. A track like To Destroy The Vale Of Time, for example, has something of Sol Invictus meet Grabesmond, with additional violin lines and even some limited lyrical lines / humming vocals. Shrouded In Mist And Pale Light is within the very same vein, sweetly touching the border of mysticism and mis(t)ery.

It’s not bombastic or majestically symphonic, it’s not of the multi-layered kind; Perdition however isn’t an easy aural experience with a desolate, floating ambience, dreamy and even romantic, but believe me that this album caresses my ear drums with a semi-erotic pleasure!