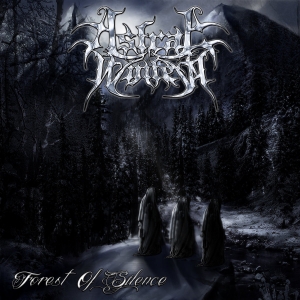 Astral Winter are an outfit by Josh Young, quite a young guy from the Australian island Tasmania. You might know his name from more Immortal Frost-related stories, like from being a founding member from that (great) Belgian label (apparently the label was originally formed by Josh???), or from being part of mighty Atra Vetosus too (for reviewing stuff on the latter: enter this band’s name in the ‘search’-option on top in order to find out and so on, and so on…), as well as being part of Hammerstorm, a fine project that also includes current Immortal Frost label owner S. Under the Astral Winter moniker, Josh recorded three albums before (two full lengths, as well as the very first release ever on the label), each of them released via Immortal Frost Productions (FYI: the review on the last album, Perdition, was published on July 20th 2014 – there is more historical and biographical matter out there, so I’d like to refer to that [evidently magisterially written] review for some additional info).

Anyway, Forest Of Silence is the third Astral Winter studio full length album, having a total running time of seventy (!) minutes. It comes in an edition of 500 copies on CD, as well as in digital format (the new era of digitally ruled machinery, or something like that), and once again it was completely created by Josh himself, production, mix and mastering included, done at his Dawnless Studio.

The aural part follows the visuals, the artwork (done, by the way, by Brutal Disorder Logos, quite an explicit and bloody design team from Mexico, for those interested, specialised in designs for t-shirts and cover artwork, logos, different layouts and flyers), meaning magic, mysterious and natural. It might be the least extravagant or explicit cover art by the design company, but it surely fits to the specific approach of Astral Winter’s elegant play. No partly-dissected corpses or ghostly appearances, but mystic woods with mystic spirits…

Which brings me, finally, to the sonic side. Those who do follow this project do know that 2014’s Perdition did differ a lot from the debut Winter Enthroned (2011) or the demo-EP Illustrations Of Death (2009). Both first records combined grim Black Metal with orchestral elements, and Perdition rather dwelled within non-Metal spheres of atmospheric and ethereal Acoustic / Ambient / Neo-Classical Music. I did not dislike the latter, but I am so hap-, eh, happ- -damn, I can’t express this word without getting the urge to vomit… So, what I want to say is that I am positively surprised (hehe, I did it… - naïve happiness often defines an infantile state of mind – but that’s another story, nor relevant right here). Forest Of Silence seems to return to the roots of Astral Winter, once again balancing in between areas of blackened explosions in wintery landscapes.

Actually, Forest Of Silence is principally based on quite simple yet intense Black Metal structures, lacking of progressing modernism (which is a good thing, for Progressive Metal would denigrate the atmosphere of this concept – see later), and with picking on characteristic details from Classic (Heavy) Metal. The latter especially goes for certain solos (cf. the opening solo on the instrumental intermezzo As I Embrace The Winter Winds) and some epic rhythm structures (listen for example to last part of Defenders Of The Astral Kingdom (Part II: Dark Is The Path To Eternity), with inclusion of fast-played piano craftsmanship). Like in the past, the blackened-metallic core gets heavily injected by symphonic orchestrations. It does, for sure, drench the whole in a cosmic bath of sub-dimensional spheres. Those keyboards are like a basic soil on which the compositions themselves are built. It would not be that strange to refer to the likes of Finnugor, Limbonic Art, Summoning, Darkspace or Astarium. No, I did not say that all those acts are like copies, but there are undeniably prominent comparisons when it comes to the approach (cf. the very important use of synths) and, in result, the atmosphere. The latter is both cold and warm, to my opinion; cold, for the grim and oppressive package in which all this seems to dwell; warm, for the sound quality (*) and the fairylike ‘beauty’ that creates a cosy, trusted zen-feeling. That might go as well for the composition of the tracks. Usually it starts with a symphonic introduction, focusing on those astral spheres, before evolving into those harsher dimensions of Melodic Black Metal. And seen the fact that all tracks are quite lengthy, and seen the specific approach / genre, you might expect several intermezzi too that go, or into cosmic-atmospheric soundscapes, or traditionally-skilled ‘timeless Metal’ structures. In each case, there is no room for boredom or no chance to lose attention and interest.

(*) the sound quality: rough and unpolished, which is fine, but I think the mix focuses too much on the lead guitars, the keyboards and the screams, with as result a minor audible presence of the whole rhythm section – no clear drum patterns on the foreground, no prolific bass lines that charm you, …

I didn’t mention the vocals yet. This is another big difference with the last album, for that one was instrumental for the better part, with only sporadically vocal additions. This time, Josh screams and cries again, once in a while assisted by guest vocalists (amongst whom Josh Gee, who plays with Josh Young in Atra Vetosus). Also some clean vocals and even semi-elfish female chants pass the revue – never in an exaggerated presence, yet modestly well-mixed into the totality of the concept.