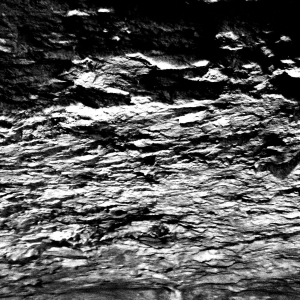 A short one, this review.

First of all: this label. I’ve expressed my appreciation for Distant Voices a thousand times before. Check out about any review I did in the past (enter the label’s name in ‘search’ and you’ll find quite some reviews, fifteen up to twenty). I never forgot to focus on the magnificent ideology that characterises this French label.

Secondly: this act. I wrote a review on each release Aube Grise did via Distant Voices, so it does not exactly need a deep-going introduction this time. Moreover, I will soon publish another review for Murailles, Hiver, Aube Grise’s latest recording, so let’s now get back to this one, Shale / Arrache-Moi, which was released earlier this year.

Thirdly: this release. As usual, this is a strictly limited recording, being thirty-one (31!) copies (and seven even more ‘wanted’ special editions, impossible to get), hand-made and you know… As usual, the visual creation has been done by Anne M., who’s the nice lady behind this project. Once again, she has been accompanied by Thomas Bel, the owner of Distant Voices, who took care of the mastering as well. Oh yes, FYI: for both artists I will soon write and publish a review on a solo recording they both did under their own moniker. But that’s for later, now first things first; and that’s this specific EP / CDr (thirty-one minutes of duration).

Shale / Arrache-Moi starts with some field recorded sounds and noises, soon joined by a short fragment of somewhat martial drumming / percussion. At almost two minutes, everything turns into an integer dually performed acoustic thing, withholding a melancholic touch. But then, at 4:44 (which is 2/3rd of 6:66, but that’s a remark without any surplus, haha), everything turns towards chaos and destruction. Shale goes on within that typifying mechanical trend of the former efforts, with blasting drum computer, bewitching guitar melodies and arctic screams. Once again it’s quite diverse, with changes in tempo and structure at the one hand, and different acoustic intermezzos or piano interludes. At about thirteen minutes, there is a slower excerpt that I deeply adore, and soon after it evolves once again into that mechanical-industrialised sounding form of Black Metal. And so it continues: grim blackened parts, acoustic sections and piano intermezzi permanently interact, resulting in a full experience.

I have to be honest, so I can’t leave this review without referring to the sound quality. It’s my duty, and as potential future listener you need to know it. Like usual, the production is shit. Sorry, but that’s the case. It’s primitive and under-produced, and there’s no excuse to defend this. Many guitar riffs sound as if they were created on a rusty chainsaw, and the drums as if recorded in a soggy container. The mix is denigrating for the bass lines and the vocals, while the drum salvos are way too overwhelming, even intrusive. A pity.

Making abstraction of the sound quality, Shale / Arrache-Moi is another fine Aube Grise release once again. It does not exactly renew anything, but it’s just an adorable recording to enjoy. There is so much to experience, and still the whole is sequacious in song writing and execution.