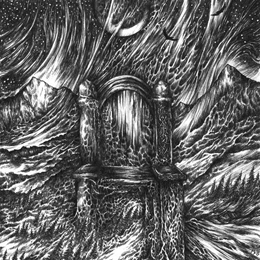 French act Aurvandil is a project that nowadays consists of forming member and vocalist / instrumentalist / lyricist / composer Aurvandil (the same guy who is active in one of France’s most impressive Death Metal projects Manipulator, acting under the hilarious name of Moil Of The Macabre Manipulation [I still need to laugh with this intelligently chosen nickname]; for the review about this project’s sole release, the MCD Voidbound, please check out the update on September 16th 2012; see ‘Archive’), and, as from this recording on, (session) drummer Fog (also known as Necropope, and former / permanent / session member in tens of great bands and projects, such as Drangsalymir, Quintessence, Birthdecline, Angmar, Sickbag a.m.o.). Aurvandil released a couple of demos and splits (with e.g. While Sad Spirits Around Me Stroll, Iranian project Halla, or Dead As Dreams) before starting some kind of trilogy. This three-part started with 2010’s Ferd (on Cold Void Emanation), followed in 2011 by Yearning (the debut on Eisenwald). All this material was written and recorded by M. aka Aurvandil aka Moil otMM, but as mentioned, this newest material was recorded with assistance of a session drummer, and not just a random one, but one of France’s best known (and simply ‘best’) percussionists. And because of the permanent evolution and variation in between the different releases (some recordings consist of pretty short assaults, while others contain lengthy compositions; this goes for this new release too - see further), I did look out to analyse this newest piece of Black Aural Art.

Thrones is a four-tracker (duration of the tracks: in between twelve and nineteen minutes, with a total running time of an hour) with, once again, an approach that breathes the purity of (Nordic) ‘Second Wave’ morbidity. It was released at the very end of last year too on tape, via Psychic Violence Records, by the way, and now it finally comes on ‘regular’ CD and LP-edition.

The album opens with For Whom Burnest Thou, which starts with a pretty length acoustic intro. But after almost five minutes, the song turns into the essential raison d’être this band stands for by bringing cold, grim and pounding Underground Black Metal with a Nineties-sound (the Second Wave I just mentioned, you see?). The repetitive riffing and forceful rhythm section fit well to the icy, gurgling blackish grunts (somewhat hysterically screaming vocals, if you want to), and this, in turn, goes quasi perfectly hand in hand with the unclean, nasty sound (note: under-produced in force, and therefore little too ‘weak’ in finalisation). Yes, when it comes to the production, I need to mention ‘underground’, ‘unpolished’, even ‘barbaric’ and, again, ‘Nordic’. And as you might know: ‘Nordic’ does nót always mean ‘Scandinavian’. On the contrary; this material rather reminds me to the scenes of France evidently, the one from Scandinavia ‘anno Second Wave’, or the one from Canada (!) - mind my devoted passion for the scene from Quebec (cf. the reviews I did / do for many Sepulchral Productions-releases). But my impression, and you will agree, is that the final sound is largely under-produced, and that’s a pity, a true pity. The project itself calls its approach ‘Glacial Black Metal’, and maybe that covers the package???

Consider it a mixture of the scenes from Scandinavia (Bathory, Immortal, Ulver), the (Underground oriented one) from France, and the core of the Quebecois Métal Noir Glacial-scene… With a pitiful production, unfortunately…