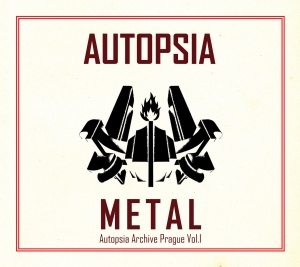 Radovan Milinkovič is a multi-disciplined artist from the former country of Yugoslavia, acting from the city of Prague (Czech Republic). This guy is active as from the seventies (!). He started working with others artists, initially in London, but as from 1990 he moved over to Prague.

AutopsiA absolutely is this guys’ most productive outfit with many releases especially via labels such as Staalplaat, Hypnobeat or their own Illuminating Technologies; but I’d like to refer to superb projects such as Hussite (though I think it wasn’t but a one-time outlet) and Splendor Solis as well! But with AutopsiA, Radovan created quite a lot of aural recordings, as well as visual art, such as television productions, booklets and design of all different kinds.

Anyway, Old Captain, a Ukrainian label run by First Human Ferro / Oda Relicta / In Meditarivm’s Olegh Kolyada, releases a compilation with material from the era 1982-1996, including previously unreleased stuff. It’s a manifestation of disproduction, based on repetition and reproduction, but I will not go too deep into this subject, for it would bring me too far. The CD-version comes in an edition of 200 copies, and everything was engineered and mastered at the Prague-based Mustakillah Studio in 2015.

The compilation starts with two tracks that have been released before the digital way: Autopsia ReMix I and Autopsia ReMix II. They represent a somewhat bombastic, even symphonic wall of sounds, quite apocalyptic in atmosphere, as well as deeply obscure, suffocating and eerie. It’s like some long-stretched wall of sound, droning and ambient. The first out of both is sort of divided into two parts, with the first one being quite integer and hypnotic, and the second half, which includes vocal sampling, being much more martial (partly caused by the additional percussion, of course, as well as those samples). The Autopsia ReMix II song, being the longest piece on this album (clocking nearly fifteen minutes), is even more diverse and multi-aspected, performance-wise, yet hugely coherent when dissecting all chapters. Here too, towards the end we can enjoy a martial growth, leaving the minimal melodies in order to strengthen a certain epic, a brave elegance of pride. Compositions like Verbumprogram Large Drawing or Space Conqueror have a certain haunting, quite horrific atmosphere, even sacral in some elements (cf. the organ-alike sound of the synths), while a piece like Autopsia Archive Recordings No. 218/6 translates a profound ritual elegance. With T.O. 2.0, AutopsiA also implements hints of Neo-Folk / Tribal alike grandeur; just dive into the weird and mad percussions and those mesmerizing keyboard lines to verify.

To my humble opinion, this compilation is quite attractive for AutopsiA adepts especially, but I think it might be quite a cool ‘meeting’ for the ignorant ones amongst us. Metal (Autopsia Archive Prague Vol I) represents a specific, little limited facet of AutopsiA’s oeuvre, but it’s an attractive angle for sure.