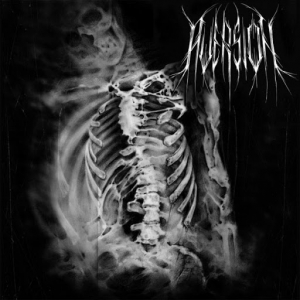 When it comes to the more Nordic-sounding, rough-edged sub-genre within the Black Metal spectrum, I sort of have a not that secret passion for the scene from Canada in general, and the Quebec-based one more specifically. So you might imagine my arousal when receiving the promotional copy for the untitled debut of Montreal-based Aversion. This band was formed in 2011 and did release a demonstrational recording in 2013 (which was called Pre-Life Nostalgia). The quintet (vocalist Vena Kava, drummer Vilain, bassist Leather King and guitarists Max Macabre and Nemrod) played live on stage with notorious acts such as Samael, Mutilation Rites, Seth, Shining, Panzerfaust and many others, but now: their first full length!

Aversion is an eight-tracker that lasts for thirty minutes only. That’s a pity, for this should last at least twice as long.

Anyway, Aversion brings that kind of material that simply pays tribute to the Old School; and then I am really (or especially / limitedly) referring to the universal tradition from the Eighties. This stuff indeed stands for Black Metal, injected with Thrash and Death Metal elements, yet focusing on the initial grotesquery (and I do NOT mean this in a pejorative way) of the scene. Imagine those vocals: more sulfuric that an erupting volcano; or the riffing and sound, primarily comparable to the First Wave scene (vocals + riffing structures + atmosphere), yet subtly winking to the grandiose magnificence of the Second Wave (sound mix, the un-traditional elements, the timeless diversification of the whole concept). In general this material belongs to the faster, more fierce part of the game, but since the general atmosphere is quite comprehensible for the ignorant ones (I mentioned ‘tradition’ before, didn’t I?)… And sorry, I have to mention an ‘oops’, for ‘faster’ needs some counter-weight, and that goes for the many slow-paced excerpts… And so on, if you want to continue the purist way. Just keep in mind: two decades ago this kind of stuff would be considered marvellous; nowadays it wouldn’t. But hey, here’s my raison d’être as being reviewer, for vh    zezrvhrbr … I just mean: cut the crap! Aversion are truly cool!