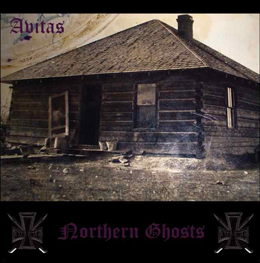 Avitas are a project from the English-speaking part of Canada (British Columbia), formed by Patrick Myrtroen, who runs the label Bud Metal Records. All Avitas-recordings have been released via this label, and then we’re talking about three studio full lengths, an EP and a live-recording. The latest full length, by the way, called Saga Of The Nationalist, sort of gets re-issued, so I will have the kindness, once again, to review it in a very near future. But first I’ll take care of this new, fourth studio full length release, entitled Northern Ghosts.

Once again, and then I am referring to the lyrical approach, there’s a certain, specific political message. Avitas are a project under the so-called NS-banner, with subjects like war and anti-Islam woven in its lyrics. But it goes further, by having drugs, blasphemy and atheism as lyrical themes too.

The aural side of Northern Ghosts, which last, by the way for fifty six minutes, is a story of ups and some downs. I have a problem with the recording-sound result, for the production is way too weak. The mix has been done with no respect at all, I think, and the balance in between the different actors is just terrible. It truly is a sad data, for it does denigrate the grotesque yet highly interesting musical core. The tracks itself are based on pretty primitive, no-nonsense fundaments, but seen the exhalation of philosophical and spiritual purity, this could not have been executed any better. It is raw and unpolished, simplistic (once again, this is NOT a negative element, yet rather a statement which I do feel extremely comfortable with), and somewhat paganised. The first part, the Side Black, comes with a take-no-prisoners attitude, while the second half, the Side Green, is little more organic, psychedelic, and mesmerizing. In a way I need to think about the wonderful Sort Vokter-project, but I guess the mutual connection indeed has to do with a certain, specific green pleasure-providing thing. Some (several) narrow-minded politicians all over Europe, and probable the rest of the world, do not recognize the impact of forb… Oops, I need to control myself; this is a review about an album, not an opportunity to make a statement about f*cking stupid ‘leaders’ of the world who have no idea how … And once again: self-censorship. Anyway, the Side Green is a psychotropic continuation of the black half, with at least as impressing riffing, nasty rhythms and eerie vocal lines. Here too I cannot agree with the terrible production (it will infect my final score, for what it’s worth), but the elementary details are truly satisfying.

Anyway, this album done with a decent production would have a score beyond imagination (somewhat exaggerated, of course, as if I could enjoy the green side… which isn’t the case right now; once again I want to refer to imbecile and infantile policy-makers in Holland and Belgium; but that’s another discussion not to make right here); unfortunately I am not satisfyingly pleased because of that inferior, even insultive sound.