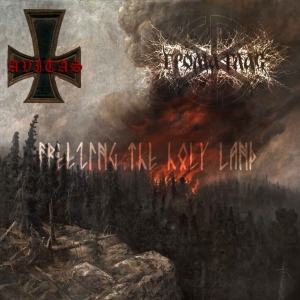 Hailing from the Canadian Western lands, Kelowna, British Columbia, Avitas are an Atheistic Libertarian Nationalistic and Anti-Abrahamic one-man army; not of the empty-headed racist kind, yet rather from a political-philosophical one. The project was formed by Myrtroen, who’s known as well from the great Kabexnuv-project (check out the review on their split with Brazil’s Dol Guldur, posted December 22nd 2015; the one on Crypt Of Black Solar Order will follow soon), and the same guy who owns Bud Metal Records. In February 2016 Avitas will release their newest full length, so as a teaser, please welcome this EP.

First this, and that’s that one might find Avitas’ part on the Bandcamp-page, for example, but there’s a CD-edition available as well (and a limited amount pressed on tape too), being part of a split with Russia’s Groma Glas, and this via Barbatos Productions.

And what Avitas bring is sort of a continuation of the past, being a melodic and epic form of timeless yet, especially, old styled (read: traditional) form of (Underground) Black Metal. But I think it sort of progressed from the past, this material, for turning back to the most minimal and nihilistic roots of the scene, heavily basing on the essence of basic riffing, a primal execution, and a sound so dense and rough (read: honest and pure)…

I won’t go to deep into the subject this time – just read my reviews for both former albums to have an idea of this project’s performance and sound (update July 24th 2014 for Northern Ghosts, August 20th 2014 for Saga Of The Nationalist; do your search via the ‘search’-tab at the right, on top…). And keep in mind that this new stuff is at least as intense, with the very same hammering rhythms, a comparable atmosphere, and a production that trespasses the limitations of the Old School, yet without getting rid of the unpolished sound of the origins… One conclusion to take: watch out for next year’s Pioneers, which will be released, once again, via the own label Bud Metal.