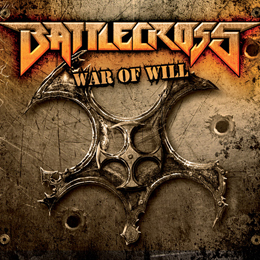 When the Detroit-based combo Battlecross ended their North American tour with In Flames earlier this year, the quartet (Kyle ‘Gumby’ Gunther-v, Tony Asta-g, Hiran Deraniyagala-g, and Don Slater-b; with session assistance on drums by The Black Dahlia Murder / All That Remains-member Shannon Lucas) entered the Audio Hammer Studio to record the sophomore Metal Blade full length, after 2011’s Pursuit Of Honor. This newest piece, called War Of Will, was co-produced by Daath’s Eyal Levi and Mark Lewis (the latter worked with notorious acts like Six Feet Under, Whitechapel, All That Remains, Devildriver, Daath and many others before).

War Of Will (36:13 minutes of length) goes smoothly on in the vein of their 2011-Metal Blade-debut. That means nastiness and brutality built upon powerful Thrash basements, and lifted up by elements of Groove and Death Metal. The tempo still varies in between the songs, from low-speed to energetically fast, and everything in between. The rhythm session is of the heaviest kind, and the interaction with well-performed and technically skilled solos is remarkably strong. The riffing is pounding and overwhelming, with a couple of masterly high-tech moments, which makes the whole dwelling in a timeless sphere. Also the vocals are dual: mainly thrashing screams, with quite a lot of deadly grunts. The production / sound, finally, is full and firm. The result, therefor, is more than just acceptable. It’s not the best release ever within the genre, but I’ve heard worse stuff too (too much, as a matter of fact), so I am sort of pleased.